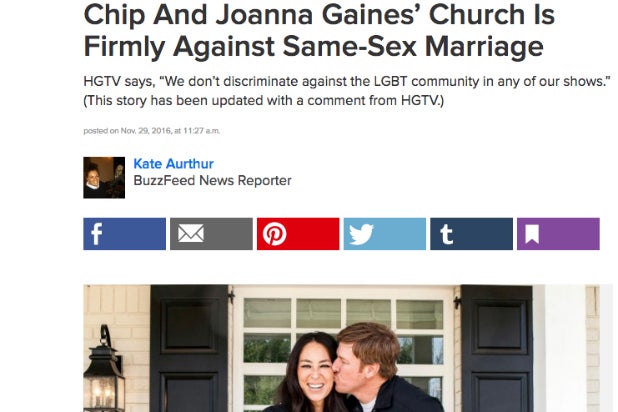 BuzzFeed entertainment journalist Kate Aurthur posted a story earlier this week wondering if “Fixer Upper” hosts Chip and Joanna Gaines might be anti-gay. Her through-line centered on the HGTV couple’s Christian pastor, who preaches homosexuality as a sin and allegedly believes in conversion toward a heterosexual lifestyle.

Since then, the BuzzFeed reporter has been getting lambasted on Twitter, where she’s being called everything from “vapid and vengeful” to “bigoted” and “intolerant.” Though the money quote may be “.@KateAurthur is a McCarthyite witch-hunter,” which comes courtesy of user Justin Raimondo.

In an op-ed, The Washington Post even referred to Aurthur’s “hit piece” as “dangerous” — so it’s not just angry social media scribes turning on the popular click-bait website’s choice to publish. Of course, there are plenty of those, and they’re simple to share.

Chip and Joanna Gaines do not owe @KateAurthur & @BuzzFeedBen an answer about their views on same-sex marriage.

It sure looks like BuzzFeed's @KateAurthur chose to attack the Gaines because she was mad that most people in Waco, Texas, voted for Trump. pic.twitter.com/1Or2UnGrjk

.@KateAurthur is a McCarthyite witch-hunter. She smears 2 people loved by gays all over America. She's probably str8 https://t.co/hSOzmI24i4

We have terror attacks where Islamists kill people for not sharing their beliefs but no, @KateAurthur thinks the GAINESES are the problem.

This week @KateAurthur became famous for all the wrong reasons. pic.twitter.com/6BMVBQAklh

@KateAurthur Did you get fired yet for bigoted intolerant hatred for other humans or is it ok for u to do that because you're liberal?

To the amazement and shock of absolutely no one (except maybe @BuzzFeedBen and @KateAurthur ) https://t.co/Ctp8wVlw5C

@KateAurthur @BuzzFeedNews the issue with this article is that it literally had no story. Just speculation. You created a story out it.

To be fair to Aurthur, her initial post on “Fixer Upper” has been seemingly endorsed by other websites like Jezebel. And, as in any Twitter bout, the response has not been totally one-sided.

As for the reporter herself, Aurthur seemed to take the negative responses in stride. She tweeted out the following:

When reached by TheWrap for comment, Aurthur told us that she’s just happy HGTV responded to her piece with the following statement: “We don’t discriminate against members of the LGBT community in any of our shows. HGTV is proud to have a crystal clear, consistent record of including people from all walks of life in its series.”

She also pointed us back to her Twitter feed, where she more-recently posted these:

The people calling me a "cunt" and wishing death upon me have a strange interpretation of what Chip and Joanna Gaines would want.

And to the people who (more civilly) have wondered about the LGBT population of Waco, #FixerUpper can manipulate things however it wants!

Especially considering that the whole house-hunting part of the show is faked: https://t.co/Q03gzwpEJs

11 HGTV Shows That Sent Ratings Through the Roof (Photos)

From “House Hunters” to “Property Brothers,” how the do-it-yourself cable network built a global TV powerhouse

The long-running realty show debuted in 1999 and to date has inspired its own uber-successful franchise with no fewer than 10 spin-offs.