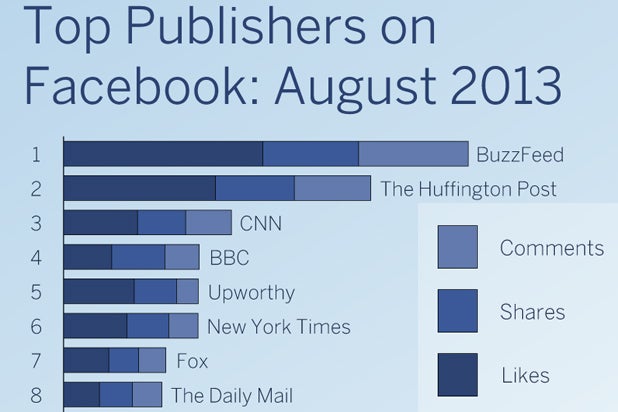 BuzzFeed, “the media company for the social age,” has mastered at least one social network.

A NewsWhip study released on Thursday showed that the social sharing-focused site had far and away the most engagement on Facebook in August 2013 out of the publishers studied. BF had 15.9 million likes, comments and shares combined in that month. The last time NewsWhip did the study, in Sept. 2012, it had “just” 2.4 million.

Also read: How BuzzFeed Is Betting on Hollywood, Long-Form Writing to Grow

BuzzFeed still performed well when it came to Twitter, placing sixth, but “real” (quotation marks NewsWhip’s) new sites tended to rank much higher than they did on Facebook.

BBC took the top spot with over 2 million tweets, far and away more times than Mashable, which was number two with 1.25 million. The New York Times, The Guardian and CNN rounded out the top five.

Though the study said that social news sharing was certainly growing, it does not necessarily correspond to what people are actually reading. The Daily Mail is the most-read news website in the world, but only managed eighth place in the Facebook list and sixth on Twitter.

Also interesting to note: while BuzzFeed and Huffington Post are certainly cleaning up on the social engagement fronts, their news products aren’t necessarily what readers are going for. The most popular story on Facebook in August was HuffPost’s “23 Signs You’re an Introvert,” while BuzzFeed’s biggest articles remain its trademark listicles, though, the report noted, some of its long-form stories have gone viral as well.

There are, of course, caveats to NewsWhip’s data — some content networks, it said, “are particularly sprawling and hard to track.” Yahoo! was cited as an example of that.