Angelina Jolie Pitt’s reputation as a competent filmmaker won’t be entirely undone by her third directorial effort, “By the Sea,” but neither will it be enhanced.

Making its world premiere Thursday night as the opener for the 2015 AFI Film Festival, “By the Sea” plays like an unconscious parody of “Last Year at Marienbad,” “L’avventura” and any number of other 1960s European dramas about beautiful people having existential crises on yachts and in villas.

What’s meant to evoke longing winds up as merely longueur; Jolie Pitt (as she bills herself here) and her husband, Brad Pitt, star as an unhappily married couple who spend so much of the film locked in wordless, passive-aggressive battle that by the time they start talking to each other, it’s too late to care about them. The characters have literally been turned into posers, photogenically suffering in and around a seaside hotel as though they were appearing in the September issue of Vogue for Depressives.

See Video: Angelina Jolie, Brad Pitt Rough Each Other Up in New 'By the Sea' Trailer

Roland (Pitt) and Vanessa (Jolie Pitt) are a glamorous but dissolute couple who drive up to a lovely, isolated European hotel. He’s a blocked author, sporting what appears to be William Hurt‘s old mustache from “Body Heat,” who spends his days getting drunk at the seaside tavern owned by Michel (Niels Arestrup, “A Prophet”).

She pops pills and skulks around the room when she’s not taking long walks by the ocean, seemingly deciding whether or not to jump in. (Vanessa may be emotionally distraught, but her makeup technique is always on point; in one scene, she showers before bed and still manages to wake up with a smoky eye.)

Their routine is interrupted by the arrival of a pair of young newlyweds. Vanessa frets that Roland wants to sleep with Lea (Mélanie Laurent, “Inglorious Basterds”), while Roland worries that Vanessa will seduce François (Melvil Poupaud, “Laurence Anyways”) simply to make herself even unhappier. The discovery of a peephole in the wall that allows Roland and Vanessa to spy on their frisky young neighbors winds up being a conduit to the couple rediscovering their own mutual attraction. 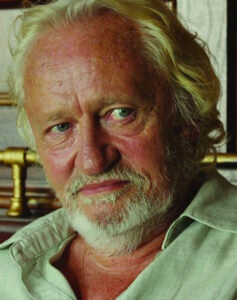 That’s the first interesting idea “By the Sea” has to offer, and it appears far too late in the game. Even more dispiriting is the ultimate revelation as to why Vanessa is so sad and why her marriage is so strained.

There are any number of reasons to support women writing and directing movies, but one of them is the hope of getting female characters whose issues can’t be found on the short list of Lady Problems that movies usually trot out in stories like this. When Jolie Pitt’s screenplay shows its hand, the reveal is obvious and predictable, not to mention simplistic.

That script also undermines the lead performances; it’s hard enough watching these two talented actors play blanks who have no chemistry with each other, but the effort seems especially pointless when we learn the root of their problems. Laurent and Poupaud, two of Europe’s finest players, are reduced to plot functionaries here, so it’s really only the venerable Arestrup who emerges with anything resembling depth or empathy.

On a technical level, “By the Sea” makes no major missteps; the widescreen cinematography of Christian Berger (best known for his work with Michael Haneke) captures the ocean as something both beautiful and dangerous, never opting for postcard prettiness, and Gabriel Yared’s score — aided by some Serge Gainsbourg songs — evokes the film’s early 1970s setting.

If “By the Sea” weren’t so aggressively humorless, it might almost qualify as camp, so unsuccessful is its pursuit of weighty drama. Unintentional laughs are hard to come by here; instead, there are yawns aplenty.