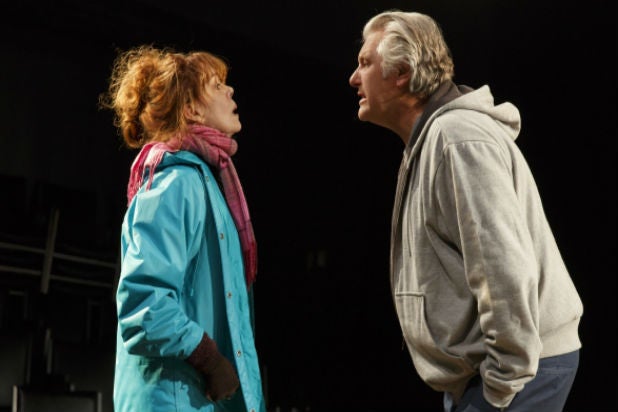 If Arthur Miller had lived to witness and write about Superstorm Sandy, his play might be very much like Sharyn Rothstein’s “By the Water,” which opened Tuesday at MTC’s City Center space in New York.

Both Miller and newcomer Rothstein can be categorized as writing kitchen-sink dramas but for the fact that their themes and the emotions unleashed are anything but commonplace. Besides, it’s doubtful the kitchen sink still functions in the devastated home of Marty and Mary Murphy.

Rothstein’s two memorable characters are played with grace and naturalism by Vyto Ruginis and Deirdre O’Connell. They are survivors of the storm on Staten Island, but their house is very much a shambles and most of their neighbors are ready to move — if they can all get together to agree on taking that government bailout. Marty hates the word “bailout,” he’s that kind of guy, and as you can see we’re already we’re in the land of Arthur Miller where the American Dream is going to take another drubbing.

Rothstein doesn’t wield as big a paddle as the moralistic Miller, neither does she use the one she’s got to whip Marty the way Miller does Joe Keller in “All My Sons.” Still, there’s more than a little of Joe in Marty. Given the chance, he might have been a Joe; then again, Marty owns a grocery store, not a munitions factory. While Rothstein doesn’t make her character guilty of major sins against humanity, he’s nonetheless a schemer and a cheat and not the erstwhile pillar of his devastated community that he pretends to be.

To Rothstein’s credit, the absorbing story she tells deserves to be more than its current one act. The new legit formula of one act in 95 minutes is not enough to cover the tragedy of the Murphy family and their neighbors. The exposition is never forced and the dialogue is often funny in a non-sitcom way, but sometimes the plot points arrive a little too fast and there isn’t time to absorb their impact before another one hits you.

Hal Brooks directs a superb ensemble that never condescends to their bridge-and-tunnel characters but rather imbues them with nuance and dignity. In addition to Ruginis and O’Connell, the actors include Quincy Dunn-Baker, Tom Pelphrey, Ethan Phillips, Charlotte Maier, and Cassie Beck.