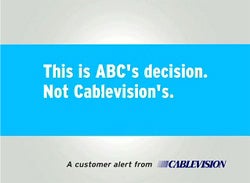 Cablevision’s 3.1 million customers in the New York metropolitan area were greeted with an announcement when they turned on their televisions on Tuesday – a day after Disney warned it may pull ABC on Sunday morning in a dispute over retransmission fees.

The four-minute spot outlined Cablevision’s side of the dispute, while placing blame for any potential blackout squarely on ABC and Disney.

“This is ABC’s decision, not Cablevision’s,” a voiceover reads. “We would never choose to take Cablevision off the air. We want you to know the truth about the situation.”

ABC is threatening to pull its channel from Cablevision “unless we pay them $40 million more per year” – a 20 percent increase over the $200 million Cablevision already pays them.

“ABC has offered us and our customers nothing new in return,” the voiceover continues. “No new programming. They just think they deserve a $40 million raise.”

The tone of the ad, while initially civil, becomes increasingly nasty:

“So why is ABC making this outrageous demand? They will tell you they deserve it because of all the great programming they have. Well, we think there are other reasons ABC is suddenly demanding this money. First … ABC’s advertising revenues are down. To make matters worse, ABC has not invested in state-of-the-art interactive advertising technologies, instead relying on 1960s-era technology. Second, their various theme parks around the world are struggling, and ABC needs to find money to prop them up. Third, ABC’s sister company ESPN is stuck making huge payments for out of control sports broadcasting rights. Finally, perhaps ABC needs an extra $40 million a year to support salary and bonuses for their executives. CEO Robert Iger alone was paid $72 million in salary and bonuses over the past two years.”

It continues: “Don’t be misled by a slick ABC advertising campaign that features ABC programming, but never mentions how much money they want. Or the fact that they seem willing to pull their channel to get the millions they are seeking. We apologize for their actions.”

Cablevision said it “has asked ABC to continue delivering WABC-7,” but “ABC is holding Cablevision customers hostage by threatening to pull its programming.”

Cablevision added that its top executives have had “lengthy face-to-face meetings” this week in Bethpage and New York, and have offered to pay ABC “as much or more than what we pay other broadcast networks,” but their proposals have been rebuffed by ABC.

No Oscars?!! ABC Threatens to Go Dark in New York in Spat With Cablevision on Sunday