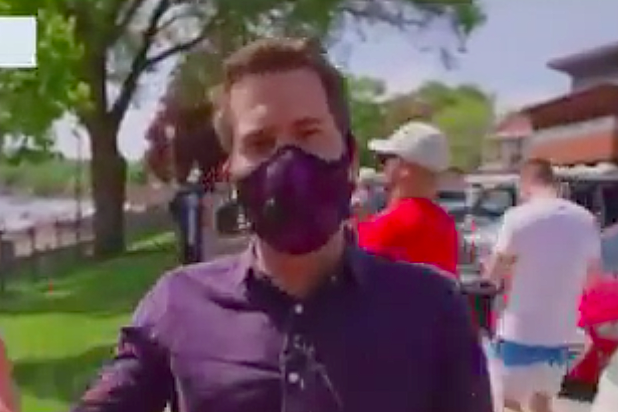 During a Memorial Day live shot in Wisconsin on MSNBC, reporter Cal Perry got some instant feedback when he pointed out that seemingly no one around him at Lake Geneva was wearing a protective face mask.

“Including the cameraman,” said a man who was walking by. He added that no one in Perry’s crew seemed to be wearing one.

The sassy retort from the mask-less lake-goer took place while Perry spoke live to anchor Katy Tur and soon got pickup around Twitter. Donald Trump Jr. even retweeted a clip of the moment published by the Daily Caller, shown below.

An MSNBC spokesperson acknowledged that the camera operator’s mask was slipped down around his neck at the time the interaction took place. The crew and Perry have been traveling the country in a set of RVs, socially distancing and avoiding airplanes and hotels while reporting on coronavirus precautions and businesses re-opening in various states. Perry elaborated on Twitter that numerous people traveled from Illinois for the long weekend specifically because masks are required in Illinois, but not Wisconsin.

Trump Jr. is no stranger to tweeting out pictures and clips that don’t show national news outlets in the best light. Earlier in May, he responded to criticism from CNN’s Anderson Cooper by posting a picture of the journalist in waist-high floodwater while his camera crew filmed from a higher, less flooded area. The president’s son added two emojis — a clown and a banana — to his tweet.

Trump Jr. has tweeted the photo of Cooper before. In 2018, Cooper responded on his show at the time, “I’ve covered hurricanes for about 14 years and it really does make me sad to think that anyone would believe that I would try to fake something or overly-dramatize a disaster.”

GUY ON STREET: "Including the Cameraman."pic.twitter.com/yMikEFrJMQ