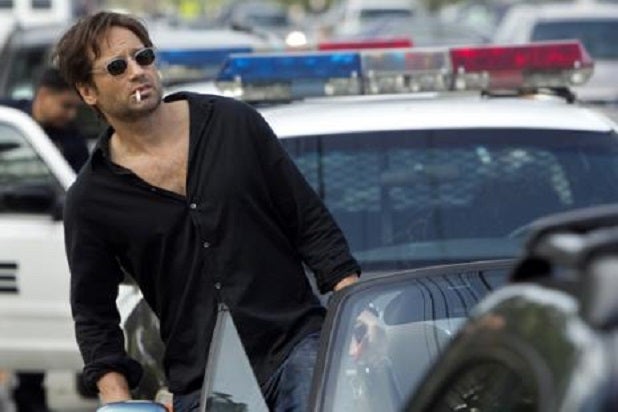 Showtime’s “Californication” climaxed with its series finale on Sunday after a seven-year buildup. And while David Duchovny might be hanging up his cojones as sexually impulsive writer Hank Moody, fear not — you’ll be seeing plenty of the “X-Files” star in the months to come.

As the nation settles into the refractory period brought on by the end of “Californication,” TheWrap looks at what’s next for its star.

Hunting Charlie Manson. Duchovny will return to the small screen with the upcoming series “Aquarius,” which has received a 13-episode order from NBC. In it, Duchovny will play a Los Angeles police sergeant in the late 1960s who’s tasked with tracking a small-time criminal and budding cult leader named Charles Manson. Yeah, that guy.

Going (Relatively) Insane. Duchovny will pair up with Maggie Grace (who had a run on “Californication”) for the big-screen offering “Relative Insanity,” an adaptation of the Chekhov play “The Seagull” set in modern-day New York and the Hamptons. Helen Hunt and Joan Chen also star.

Tugging at Your Heartstrings. Duchovny also stars in the upcoming film “Louder Than Words.” Also starring Hope Davis, the film promises to be a real tearjerker. Based on a true story, the movie tells the story of a couple that creates a renowned children’s hospital after after their daughter dies of rabies.

Maybe More “X-Files”? With “Californication” coming to a close, Duchovny has asserted that he’s open to reprising the career-making role of UFO-obsessed FBI agent Fox Mulder. “I would always want to do [another “X-Files” movie],” Duchovny told Rolling Stone. “I wish we’d done more already.” Is the sequel out there?

Hopefully Not This. Because, really, there’s no call for this, and there never has been. Ever. Under any circumstances.