This review was originally posted for the film’s world premiere at the 2022 Sundance Film Festival.

Wishes aren’t decisions, decisions aren’t actions, and actions aren’t a given, especially where rights are concerned. Women intrinsically know this struggle — not just for choice itself, but for what choosing entails — and Oscar-nominated “Carol” screenwriter Phyllis Nagy incisively, humanely explores that in her gripping, personable drama “Call Jane,” the story of a suburban Chicago housewife (Elizabeth Banks) encountering an underground network of women facilitating safe abortions in the years before Roe v. Wade.

The Janes were real, an activist collective operating illegally but diligently to help pregnant women from all walks of life through a very particular hardship, and their incredible story is the subject of a documentary (“The Janes”) that’s also premiering at this year’s Sundance. But what makes Nagy’s dramatization the perfect complement to testimony-driven non-fiction told from the inside is that it’s artfully crafted from Hayley Schore’s and Roshan Sethi’s screenplay to be a journey from the outside in, showing how reality can necessitate a personal and political awakening.

Nagy’s elegantly metaphorical opening shot tips this beautifully, starting with an arrowed “Ladies” restroom sign and following elegantly attired Joy (Banks) as she glides past the ballroom, where her lawyer husband Will (Chris Messina) is in the thick of a partners’ dinner, and toward the curious noise of protesters outside the police-protected entrance. The cha-cha music stops, and we hear in the distance the famous 1968 anti-war chant, “The whole world is watching!” 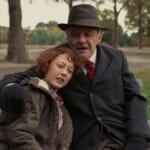 Joy senses, and respects, the change in the air, but doesn’t see her own comfortable domestic life with her husband, teenage daughter Charlotte (Grace Edwards), and friendly widowed neighbor (Kate Mara), in those terms. When her pregnancy turns life-threatening, however, and the hospital’s all-male gatekeepers disallow termination, her desperation leads her to a posted number on a flyer and a friendly female voice. 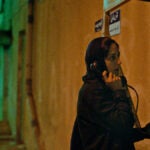 Joy is soon set up with a blindfolded ride from Gwen (a rock-solid Wunmi Mosaku, “Loki”), who collects $600 from her; an all-business procedure in a nondescript office from a brusque, white-coated young man (Cory Michael Smith, “Gotham”) who asks if she’s a cop; and afterward, in someone’s house, homemade spaghetti and recovery advice from the no-nonsense Virginia (Sigourney Weaver), who seems to be in charge.

When Joy learns about how the Janes operate, she’s drawn to assisting them secretly, which turns into helping them realize they can be stronger, more caring, and less cash-dependent so that poorer candidates don’t have to pay. These moves (drawn from the real trajectory of the Janes, if here attributed mostly to a fictional character) make for wonderfully suspenseful, emboldening, and even humorous scenes of problem-solving and maneuvering. 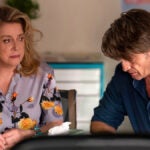 Banks is the ideal avatar for this evolution, too, magnetic as she is with conveying the percolating smarts and hidden strength underneath a composed appearance. Weaver, meanwhile, is excellent as the tart-tongued mother radical newly energized by the forward-thinking “Jackie O,” as she teasingly refers to Joy, furthering their mission. Elsewhere, Messina proves once more why he’s so good at well-intentioned men with blind spots, and in roles deceptively small but finely nuanced as they relate to the ripples in Joy’s world, Mara and Edwards shine.

Though the movie always makes clear how serious, necessary, and fraught the Janes’ work is, Nagy — returning to the directing chair for the first time since her 2005 HBO film “Mrs. Harris” — avoids the trap of issue-film sensationalism, focusing on the spark and spirit of communal endeavor even as it addresses pitfalls of race and privilege in the Janes’ efforts, and effectively conveys (again, with sometimes surprisingly well-handled levity) what makes for a safe abortion.

It’s no small feat to hew to the same no-judgments ethos the Janes held about their desperate candidates, so it’s a welcome turn in the second half when, as Joy’s double life risks exposure, a premium is put on how believably complicated, and worthy of understanding, everyone’s reactions are. With Greta Zozula’s intimately textured 16mm cinematography masterfully evoking a world of care and carefulness made lived-in by the wonderful cast, the film is practically a handbook in compassion as the key to bridging divides, while simultaneously never losing any of its storytelling flair or baked-in righteousness. It’s an asset also evident in Nagy’s keen deployment of period music (both diegetic and non-diegetic) as culturally organic commentary, not merely thematic or period-shading crutches.

In an unjust world, the Janes did what they had to do to give aid, comfort, and hope to women with nowhere to go. At its richest and most riveting, when it’s seizing your breath or making you laugh or opening your eyes, “Call Jane” is about what it takes to come to that realization about true liberation, and what it means to see it through. Though its dark setting brims with the light of the remarkable work of these inspiring agents of agency, one can only hope that, considering grim turns of late in the fight for women’s access to health care, “Call Jane” isn’t also, ironically, showing us what lies ahead.