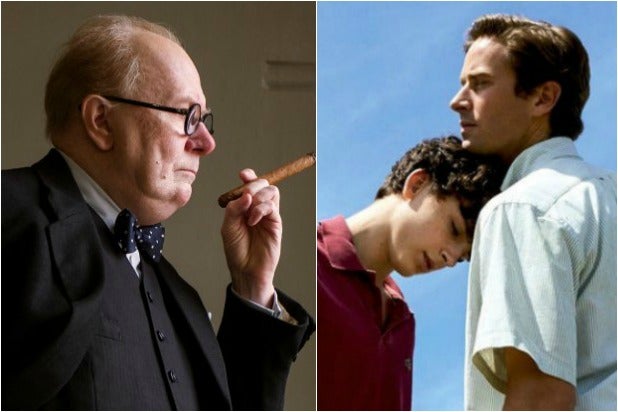 The coming-of-age LGBT film stars Timothee Chalamet as a teenage Italian-American who falls in love with his father’s student (Armie Hammer) during the summer of 1983. Based on the novel by Andre Aciman, the film is directed by Luca Guadagnino from a screenplay by James Ivory. The film has received critical acclaim with a 98 percent Rotten Tomatoes score.

“Darkest Hour” has also performed well in its four-screen start, grossing $248,000 for a PSA of $62,000. The Winston Churchill biopic stars Gary Oldman as the famed prime minister, along with Ben Mendelsohn, Kristin Scott Thomas and Lily James. Joe Wright directed from a screenplay by Anthony McCarten, and the film has a 86 percent RT score.

In wider release was Bleecker Street’s “The Man Who Invented Christmas,” making $1.3 million from 626 screens. Telling the story of Charles Dickens and how he came to write “A Christmas Carol,” the film stars Dan Stevens as the author with Christopher Plummer as Ebenezer Scrooge. The film has a 79 percent RT score.

Among holdovers, “Lady Bird” passed the $10 million mark after expanding nationwide to 791 screens and making $5.3 million over the five-day weekend. “Three Billboards” also did well in its third weekend, expanding to 590 screens and adding $5.8 million to bring its total to $7.6 million. Meanwhile, Good Deed’s “Loving Vincent” crossed the $5 million mark in its tenth weekend, making $263,000.