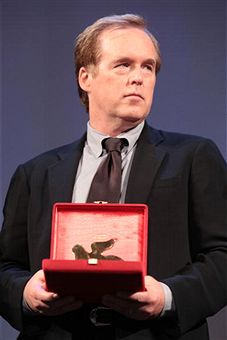 • Wow! Did Hollywood actually get one right for a change?

THR’s Heat Vision blog is reporting that Brad Bird is in contention to direct "Mission: Impossible IV" for Paramount. It’s an inspired choice that I never would have thought of. I guess that’s why studio execs get paid the big bucks.

Bird has never directed a live-action feature, but he happens to be an excellent storyteller who has enjoyed phenomenal success directing animated films such as "The Iron Giant," "The Incredibles" and "Ratatouille." The last two films won Oscars for Best Animated Feature.

Heat Vision also reveals that in addition to previously reported candidate Ruben Fleischer, "Scott Pilgrim vs. the World" director Edgar Wright has also met with star Tom Cruise and producer J.J. Abrams, who I thought did a bang-up job with "Mission: Impossible III."

Should Bird choose to accept "Mission" as his next project, he’d be the first Pixar filmmaker to make the switch to live-action filmmaking, since "Finding Nemo" and "Wall-E" director Andrew Stanton‘s "John Carter of Mars" won’t be released until 2012, and "M:I:4" is currently set for a May 27, 2011 release date.

Andre Nemec and Josh Applebaum are writing the script after developing the story with Abrams.

"Clash of the Titans" star Liam Neeson will play President Lyndon B. Johnson, while Cedric the Entertainer will play Ralph Abernathy, who worked closely with Martin Luther King Jr. to plan the historic protest march.

It’s about time Cedric the Entertainer stretch himself with a dramatic role, and Daniels seems particularly pleased with his casting.

Meanwhile, Neeson’s casting appears to be a betrayal of his assumed attachment to Steven Spielberg‘s long-rumored biopic of President Abraham Lincoln. Of course, it’s possible Neeson could play both Presidents, but I would’ve liked to have first seen him in the White House wearing Honest Abe’s beard and top hat.

I’m not familiar with the "Buck Rogers" property but Deadline describes the character as a fighter pilot who wakes up in the future and puts his skills to use defending the planet from invaders.

Paradox is paying for the project’s development while producers seek full financing. Anderson has already begun casting his adaptation of "The Three Musketeers," which Summit will distribute in North America.

Who do you think should play "Buck Rogers?"