In today’s Callbacks — your daily roundup of casting news from Deal Central — Jay Roach confirms "Austin Powers 4" is in the works, Garry Marshall fantasizes about "Laverne & Shirley & Jamie Foxx" and Sony hires a writer for its 3D "Popeye" movie. 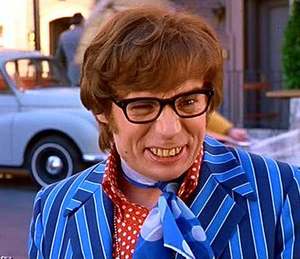 • On the heels of today’s "Scream 4" news, MTV reports there is another ‘4’ in the works, and this time it’s attached to the "Austin Powers" franchise. Can you say ‘yeah, baby!’ or did "Austin Powers in Goldmember" drain you of the will to live?

Series director Jay Roach confirmed that writer-star Mike Myers is "working on ideas" for a fourth film, a plan he fully supports. Roach sounded enthusiastic about the chance to revisit those characters and work with that team again, but my guess is he feels the same way about another "Meet the Parents" sequel too, so who knows where his franchise loyalty lies.

Like "Scream," I had multiple "Austin Powers" posters plastered on my childhood bedroom wall (I was obsessed with posters as a kid — lay off!). Like "Scream 3," "Goldmember’s" Dutch skin flakes left a bad enough taste in my mouth to warrant a lengthy hiatus. And like "Scream 4" — because I’m just a 26 year-old teenager — I can’t wait for "Austin Powers 4!" Like MTV, I’m not sure where this series can possibly take the International Man of Mystery, but Myers has my devoted fandom, even after "The Love Guru." Here’s hoping he makes room for Fat Bastard in the sequel.

Roach’s can’t-miss comedy "Dinner for Schmucks," starring the impressive comic trio of Steve Carell, Paul Rudd and Zach Galifianakis, opens July 23 and will be enduring a test screening tonight on the Paramount lot, so if you’re curious about how the movie is, I’d advise you to keep an eye on AICN over the next few days.

After watching Foxx’s positively wacky appearance on "The Tonight Show with Jay Leno" several weeks ago, I wouldn’t necessarily put this one past him, but when TheWrap followed up on this fairly ridiculous rumor, Foxx’s agent said through his publicist that there was "no truth" to the story.

I, for one, am relieved. Not because I don’t think Foxx can write a funny "Laverne & Shirley" movie. He is an alumnus of "In Living Color," after all. I just don’t like Jennifer Garner movies… and I can’t really explain why. Chalk it up to a cinemystery.

• Sony and "Spider-Man" producer Avi Arad are negotiating with former Variety reporter Mike Jones to write an all-CGI "Popeye" movie that will be released in 3D, reports Variety.

The film’s plot is currently being kept under wraps but something tells me it will involve Popeye saving his main squeeze Olive Oyl and their adopted child Swee’Pea from big bad Bluto.

With this announcement, it’s safe to add Jones to the list of former journalists currently living the Hollywood dream. The writer also has "The Minotaur Takes a Cigarette Break" (which sounds like a "Life and Times of Tim" segment) in development at the Gotham Group. Allow me to offer my personal congratulations to Jones, who I used to work with at Variety. Couldn’t have happened to a nicer guy.

Popeye hasn’t really been around in decades (neither were Alvin and the Chipmunks, and look how well those movies did), which could hurt its marketing value, but Sony claims he remains the world’s top licensing character in food thanks to his ability to hawk green vegetables, which unfortunately seem to have escaped my blogger-friendly fast-food diet. The studio is also behind the similar "Smurfs" project and looks to be placing its eggs in the nostalgia basket.

Popeye last appeared on (or should I say ‘disappeared from,’ considering it was a notorious flop) the bigscreen in 1980 when Robert Altman directed Robin Williams as the spinach-eating sailor.

• Ben Stiller weighed three very different movies as his next project, including "We Bought a Zoo," "Mr. Popper’s Penguins" and "Help Me Spread Goodness"