Callie Hernandez (“The Flight Attendant”) and Ashley Denise Robinson (“Taking Stock”) are hiding out in a clip from the SXSW debut “Jethica.”

The 2022 SXSW Film Festival is underway in Austin, and “Jethica,” the third feature from Pete Ohs, co-director of the award-winning Julia Garner film “Everything Beautiful Is Far Way,” will world premiere in the Visions section Saturday.

Billed as a “supernatural dark comedy like you’ve never seen,” “Jethica” stars Hernandez as Elena and Robinson as Jessica, old high school friends who reunite New Mexico under strange and eerie circumstances. Jessica is on the run from a stalker named Kevin, who follows her everywhere she goes, while Elena is hiding out at her grandmother’s ranch after a freak accident. But when Kevin shows up at the ranch, the duo has to seek help from beyond the grave to get rid of him … for good.

Will Madden (“The Wolf Of Snow Hollow”) and Andy Faulkner (“Youngstown”) also star. 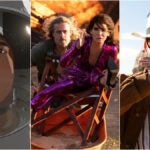 The film also has an intriguing production story. Per a press release, “Jethica” was “conceived and created through radical approaches to filmmaking” as “Pete Ohs continues to push the boundaries of indie film, collaborating with his four leads on the script and story of ‘Jethica,’ each of whom shares writing credits.” Ohs also edited the feature live while streaming on Twitch last year, after filming in January 2021 amid the pandemic.

Check out the “Jethica” clip above and a list of all the SXSW screening options below.

“Jethica” is produced by Ohs and executive produced by Ryan Kempe. Callie Hernandez is repped by UTA and Management 360 and Will Madden is repped by Carol Shaginaw Talent. The film was previously selected for the 11th edition of US+Canada in Progress Wrocław, hosted by the American Film Festival.