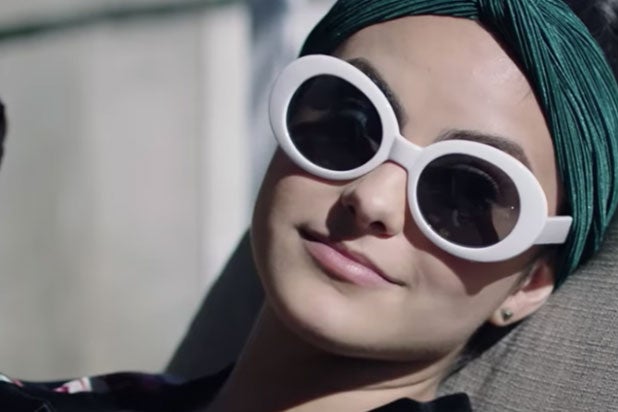 Camila Mendes didn’t shy away from provocative subject matter in her first film, “The New Romantic,” which focuses on people in a purely transactional relationship — also known as sugar babies.

“The common misconception is people compare sugar babies to prostitutes, [which is] a very ignorant way of looking at sugar babies,” Mendes told TheWrap. “They have a choice, they made that choice, and they are comfortable with that choice. I don’t agree with this habit that people have of judging women for being comfortable with their sexuality or using their sexuality. Sexuality is such a personal matter. If you are comfortable doing something with your body, why should you stop yourself from doing that? Because of what the world thinks? It’s just unfair and I think people should have the freedom to make that choice for themselves.”

Mendes got involved with the project after the film’s director, Carly Stone, reached out to her while she was shooting season two of “Riverdale.” She was able to get a Friday and a Monday off from the show and filmed her “New Romantic” role in just two days.

“It was my first film and I was so eager to experience something new and it was a character that was perfect,” Mendes explained. “I couldn’t have asked for a better role to shoot in two days. She’s a fun character, she’s very confident with herself, she’s shameless about what she does, and I thought that was very important and powerful. She’s a catalyst for change in Blake’s life, and she’s the reason why Blake goes on that whole journey.”

“I thought it was an important project to be part of. I don’t know if I’ve ever seen a movie that deals with the sugar baby lifestyle in such an honest, non-judgmental way,” she told TheWrap.

“The New Romantic” follows Blake (Jessica Barden) who is frustrated with the lack of chivalrous guys her own age, so she starts to date an older man in exchange for gifts instead. The story begins when Blake meets Morgan (Mendes) in a liquor store. The two accidentally swap IDs, and Blake goes to find Morgan’s house to switch them back, which is when Morgan entices Blake to think about becoming a sugar baby.

“My favorite scene is the bathroom scene,” Mendes said. “I don’t know why — is it weird to say I just loved the idea that I’m like, peeing in a toilet while telling Blake how pretty she is? Also, it hints at Morgan’s bisexuality — she is definitely hitting on Blake while also inviting her to be a sugar baby.”

The actress will next star in “The Stand-In,” co-starring Noah Centineo. Mendes currently stars in the third season of “Riverdale,” a show that has become so successful that it probably won’t go away anytime soon. And the actress says she likes dabbling in feature films and TV at the same time, and promises that she will never “limit” herself in terms of which projects she’ll take on.

“‘Riverdale’ is a very stylized show, and it’s in a sense choreographed,” she said. “It’s very plot-driven and you can’t go off the book. In that way, that’s what I was used to going into this indie film environment, where now, we are playing realistic characters that are our age. There was this freedom and liberation playing the character — I never had to land a mark, I never had to find the camera. The camera found me. It was more about the story and the realism of it all. It wasn’t as staged.”