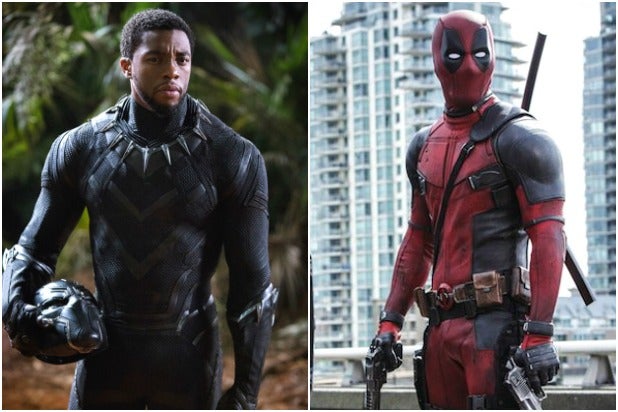 Two years ago, “Deadpool” pushed the boundaries of what a superhero movie could do outside the traditional blockbuster season, making a February-record $152 million on President’s Day weekend. But this weekend, “Black Panther” could rip that record to shreds with some vibranium claws.

With three days to go until the film’s Thursday night nationwide release, independent trackers have Ryan Coogler’s superhero movie making $165 million over the four-day weekend. Not only would that set a new February box office record, but it would bring “Black Panther” close to the record for the biggest opening for a single-superhero movie, which is currently held by “Iron Man 3” with $174 million.

As it stands, “Black Panther” is expected to post an opening that would rank in the top 10 for superhero films. Disney is projecting a more conservative four-day start of $150 million, which would equate to a 3-day total of roughly $130 million. To crack the top 10, “Black Panther” would need to to beat the $133.6 million made by “Suicide Squad” in August 2016.

If fan buzz and critical reception are any indication, “Black Panther” should hit that target easily. Today, it became the highest rated superhero film of all-time on Rotten Tomatoes with a “Fresh” rating of 97 percent, beating the 94 percent scored by “Iron Man” a decade ago. These rave reviews come after months of growing hype, beginning with a teaser trailer released in June that has earned over 35 million views on YouTube. And unlike other movies, the momentum hasn’t stopped for a second.

“Usually, when a film like ‘Black Panther’ shows a lot of buzz and momentum three weeks out, it tends to hit a wall prior to its release,” IMAX CEO Greg Foster told TheWrap. “But ‘Black Panther’ hasn’t hit the wall. It’s not even in the vicinity of it. Buzz for this movie just keeps growing and growing and growing, and that leads us to believe that this movie is peaking at the right moment.”

That could also mean big things in the weeks ahead. No film is expected to challenge “Black Panther” for the No. 1 spot on the weekend charts until Ava DuVernay’s “A Wrinkle In Time” — also a Disney release — comes out on March 9.

That means Black Panther has an open runway to bring in strong numbers long after it’s released, and it wouldn’t be the first movie with such hype to do so. Two of last year’s most talked about films, “Get Out” and “Wonder Woman”, earned enormous pre-release buzz as films that satisfied the growing demand for more stories about and by women and people of color. Both of those films ended up being some of the longest lasting films at the box office in 2017, with “Wonder Woman” grossing $412.5 million after a $103 million opening while “Get Out” made $176 million, more than five times its $33 million start.

“Films that tap into that demand for diversity have shown that they can keep interest among moviegoers long after their opening weekend,” said comScore’s Paul Dergarabedian. “‘Black Panther’ is the first big superhero film with a predominantly black cast, and a lot of African-American moviegoers have been waiting for something like this for a long time. I expect a lot of people are going to want to see this one more than once.”

But that interest in seeing a black superhero isn’t nearly as big in international markets, leaving a big question mark over “Black Panther”‘s overseas outlook. The film is expected to make $75-115 million outside North America as it opens in 70 percent of global markets this weekend. The film opens in Russia next weekend, followed by Japan on March 1 and China on March 9.

“Black Panther” follows T’Challa (Chadwick Boseman) who, after the death of his father in “Captain America: Civil War,” returns home to the isolated, technologically advanced African nation of Wakanda to take the throne as its new king. But when vicious arms dealer Ulysees Klaue (Andy Serkis), returns to threaten the kingdom,  T’Challa’s mettle as king–and Black Panther–is tested when he is drawn into a formidable conflict against enemies both inside and outside his kingdom, including the mutinous Erik Killmonger (Michael B. Jordan).