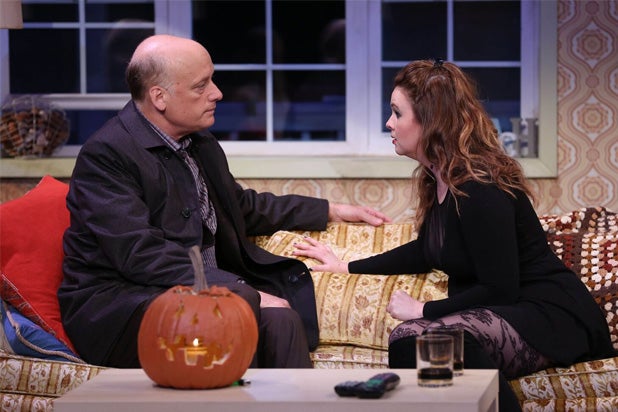 The most fascinating character in Gina Gionfriddo’s new play, “Can You Forgive Her?,” doesn’t show up until about two-thirds of the way through. One could debate over whether Gionfriddo has written a great role in David, who’s paying to keep one woman while living with another woman he never sleeps with (except for appearances), or if the magnificent actor Frank Wood just makes him look great. Judging from the Off Broadway production that opened Tuesday at the Vineyard Theatre, it’s no doubt an inspired combination of the two. Wood  brings an off-center gravitas to a shaggy-dog story desperately in need of focus.

Before David arrives on stage, we’ve been hearing about him for much of the preceding hour as Miranda (Amber Tamblyn) complains about David the Sugar Daddy to Graham (Darren Pettie), whom she has just met. This very long conversation takes place in a cottage that Graham recently inherited from his deceased mother. The place is cluttered with boxes marked “Novel,” “Notebooks,” “Diaries” and other words that indicate the many things this dead woman wrote that never got published.

Actually, this conversation is preceded with an even less promising one between Graham and his girlfriend, Tanya (Ella Dershowitz), who wants him to fix up the cottage so he can sell it or get a job. Tanya works as a bartender, and it’s at this bar that Miranda has been causing a ruckus between scenes one and two of “Can You Forgive Her?” Somehow, and this gets a little foggy, Graham helps Tanya by getting Miranda out of the bar and giving her a ride to his cottage, where their alcohol-laden conversation continues.

Graham harbors deep Mommy issues. (This is a guess, but the “Her” of the title is probably mom.) And Miranda has serious money issues, which are always more interesting. She’s deeply in debt, which is one reason she must put up with a creep like David, a doctor who founded a charity for children with cleft palates, because he wants to appear human, which he is not — in Miranda’s oft-voiced opinion.

The great thing about David is that he completely agrees with Miranda’s low opinion, and no insult she can hurl at him makes him want to change his mind about himself. David needs Miranda.

Gionfriddo is terrific at writing Miranda’s verbal assault and David’s steady acquiescence. She’s also equally good when pairing off the self-indulgent Miranda with the hardworking Tanya, whose retort “What med school did you go to?” sums up everything there’s to say about ridiculous student debts.

The dialogue crackles whenever Miranda, David and Tanya are going at each other. It almost never does when Graham is involved, and that’s the first 60 minutes of “Can You Forgive Her?”

The introductory scene between Graham and Tanya is especially flat. While there’s a big payoff as soon as David appears, it’s a long wait, and in the end Graham, who never leaves the stage, remains uncompelling in his mother fixation.

With the exception of Wood, Peter DuBois directs his actors to bring a sit-com bounce to their performances, which diminishes the material. While Tamblyn effectively conveys Miranda’s spoiled core, she should not turn pouting into a character tic.