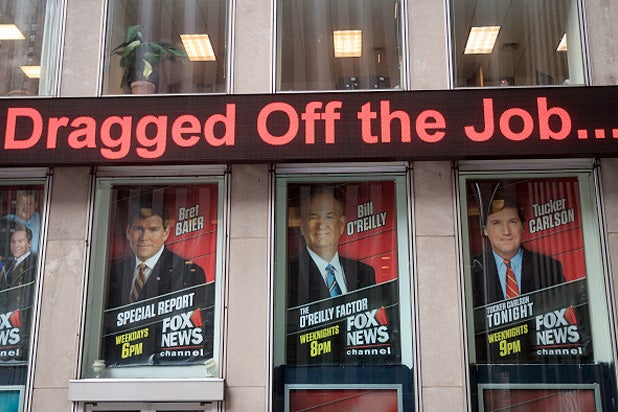 It’s not a given that Fox News will survive without it’s biggest star, now that the network has cut ties with Bill O’Reilly amid sexual harassment allegations.

Rupert Murdoch’s Fox News will survive — as in exist — so its passionate fan base doesn’t have to worry over whether the network will shut down. However, for a channel that is often the most-watched among all of cable, not just cable news, dropping to the likes of CNN would sting just as much as closing its doors.

When Megyn Kelly left the network back in January we made an argument that Fox News will be “just fine” without her. Her replacement, Tucker Carlson, thrived and the Fox News machine continued to truck along without Kelly.

While Kelly is undoubtedly a superstar, she is no O’Reilly. She was hot for a few years, while O’Reilly has been the face of the network — and the cable news industry as a whole — since George W. Bush’s first term as president.

One thing O’Reilly and Kelly have in common is the fact that Carlson was called upon to replace both of them. In fact, Carlson also replaced Greta Van Susteren when she bolted last year. Fox News’ new primetime lineup will be Carlson at 8 p.m. ET and “The Five” at 9 p.m. ET, while Hannity will remain in his 10 p.m. ET timeslot. It appears FNC execs feel Carlson can succeed no matter when his shows airs.

But “The O’Reilly Factor” finished 2016 as the most-watched show in cable news and O’Reilly has dominated competition for nearly two decades, finishing at No. 1 in all of cable news for 16 straight years. In some states, there are licensed drivers that have never been alive in a world where O’Reilly wasn’t the most-watched cable news program.

“The O’Reilly Factor” wasn’t just a profitable show. The one-hour evening talk fest has been the network’s cash cow, generating a whopping $446 million in advertising from 2014 through 2016, according to Kantar Media.

O’Reilly’s position at the network became increasingly untenable following a bombshell New York Times report on April 1 that O’Reilly and Fox News have made payouts totaling about $13 million to five women to settle claims of sexual harassment and other inappropriate behavior. Additional female accusers have stepped forward in the weeks since the Times story and dozens of advertisers quickly distanced themselves.

The allegations against O’Reilly became public only months after founding Fox News CEO Roger Ailes stepped down in disgrace last summer after he faced his own accusations of sexual harassment, first by a former on-air host and then by additional female employees who came forward with similar allegations.

Fox News simply couldn’t afford another public relations nightmare and cut ties with O’Reilly despite the fact that he is still calling the harassment claims “unfounded.” It took only 18 days from the Times report until 21st Century Fox announced the breakup.

Meanwhile, Carlson has already proven — twice — that he can successfully fill the shoes of a popular Fox News host. It’s safe to assume he’ll continue to be one of the most-watched shows in all of cable news, but matching O’Reilly’s viewership totals could be a challenge on a regular basis. Carlson won’t have to go head-to-head with MSNBC’s red-hot Rachel Maddow anymore, so that helps. However, Carlson also won’t have the luxury of O’Reilly as a lead-in anymore and it will be interesting to see which of these variables makes a bigger impact.

O’Reilly’s slow-paced, pre-written opening segment catered to older viewers so much that Fox News essentially put subtitles on the screen so the hearing impaired can read along. His popularity has made him a household name among both fans and haters, allowing him to publish numerous best-selling books that often get turned into successful made-for-TV movies.

Despite O’Reilly’s unquestioned star power, Fox News wrapped up last week as the most-watched network among all of cable for the 15th straight week even though O’Reilly was on vacation for three of the days and substitutes anchored “The O’Reilly Factor.” The “Factor” saw an overall ratings drop of 26 percent with guests hosts Dana Perino, Eric Bolling, and Greg Gutfeld.

Fox News has shown that its formula of right-leaning opinion translates to success, and has made media-industry stars out of everyone from a former White House press secretary to the former editor of Stuff magazine. Perhaps everything will be OK. Or, maybe, losing O’Reilly will result in Fox News gradually slipping to the viewership totals of rival CNN.

All we know for certain is that a new era starts at Fox News on Monday and it might be the most difficult challenge the network has faced since launching back in 1996.