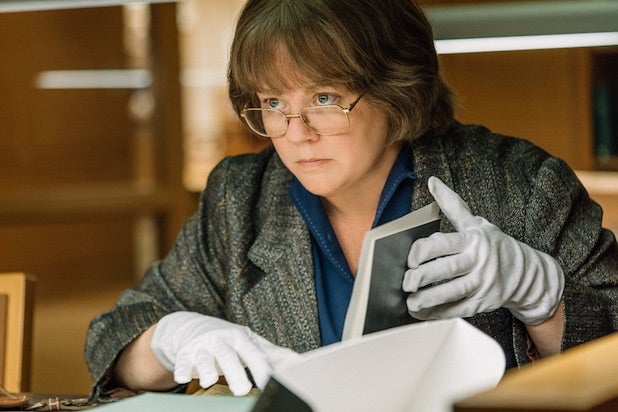 It is not often that audiences are treated to a central character as compelling as the one in Marielle Heller’s new film, “Can You Ever Forgive Me?,” which has emerged as the surprise of the Telluride Film Fest. Melissa McCarthy and Richard E. Grant give bravura performances that hover on a high-wire between comedy and tragedy, as we watch the world of two barely-there people crumble.

McCarthy plays Lee Israel, a famous forger who spent several months plying that craft before she attracted the attention of the FBI in 1993. We first meet Israel as a once-legit writer of pop biographies who is on the skids. Her agent (Jane Curtin, a sight for sore eyes) laughs in her face when she asks for an advance.

No one wants to read her Fanny Brice biography, no one likes her because she’s mean and no one takes her seriously because she can’t even manage the basics of taking care of herself.

Also Read: Watch Melissa McCarthy Forge a Path Into the Oscar Race in 'Can You Ever Forgive Me?' Trailer (Video)

In the film, Israel is disconnected from almost all human contact. Grouchy, acerbic and wholly unbearable, she has one friend in the world and that’s her beloved cat Jersey, who has suddenly fallen ill. With no money to pay the vet, bills mounting and her rent overdue, she decides to steal and sell letters by famous authors.

When that well runs dry, she begins to type up fabrications herself, making them look vintage and selling them to eager collectors who can turn them around for a higher profit.

It is a game that can’t last, reminiscent of the crime of deception that’s uncovered in Robert Redford’s “Quiz Show,” with similar tension and a similarly rapid collapse.

The script is written by Nicole Holofcener and Jeff Whitty, and serves as an astonishing step forward for Heller, whose work here ought to cement her cred as one of the major up-and-coming female directors. This is only her second film, after “Diary of a Teenage Girl.”

It is McCarthy’s show, however, and it’s hard to imagine how this film might have turned out if its original actress, Julianne Moore, had played Israel. McCarthy is known for carrying movies and for her vulgar, gaudy comedy, but she’s also appreciated for her sweetness on “Gilmore Girls” and renowned for the depth she brings to her blockbuster comic roles.

Even Megan in “Bridesmaids” (“This was not easy going up and down the hallways in high school”) had a layer to her portrayal that was heartbreaking. In “Spy,” she worked through her secret love for a disinterested Jude Law and made us feel every self-inflicted emotional bruise.

No comic can be such a skilled reader of human foibles and not have a serious actress lurking beneath the facade of humor. McCarthy, like so many comedians, clearly knows pain. As flawed as her Lee Israel is, as cruel as she can sometimes be, it’s impossible not to remain on her side, not to feel for her by the film’s end. Her Lee is hard to like, but even harder to dislike.

Her sidekick is the hilarious rogue Jack Hock (Grant), who becomes her only two-legged friend, drinking buddy and, later, accomplice. Ultimately, Israel is guilty of being too good at what she does — she’s such a good writer, she says in the film, that she’s a better Dorothy Parker than Dorothy Parker herself.

“Can You Ever Forgive Me?” is that rare movie you never want to end, a film about broken people, loners who hover on the fringes, who scavenge what’s left of the important stuff that more socially competent humans leave behind. It’s hard to understand how a writer as talented as Israel ended up investing her time and skill in imitating others. McCarthy’s character offers an explanation: Deep down, it ended up being easier writing as other people so no one could criticize her.

(Israel would eventually write a memoir of her life in crime, such as it was. It made her famous in a way that her books about other people never could.)

“Can You Ever Forgive Me?” turned out to be one of the most popular films in Telluride, and should easily land both McCarthy and Grant Oscar nominations. And Holofcener, after more than four feature films and countless television episodes, is finally looking at her first nomination for screenplay.

One of the striking takeaways from Telluride is how different it is to see women directed by women as opposed to men. Gone is the requirement to look good in every scene, and somehow this one subtle change has made all of the difference in the kind of range the actresses are allowed to explore.

Nicole Kidman gives one of those performances in Karyn Kusama’s “Destroyer,” and McCarthy does the same with Marielle Heller’s eye behind the camera. Imagine that kind of freedom.