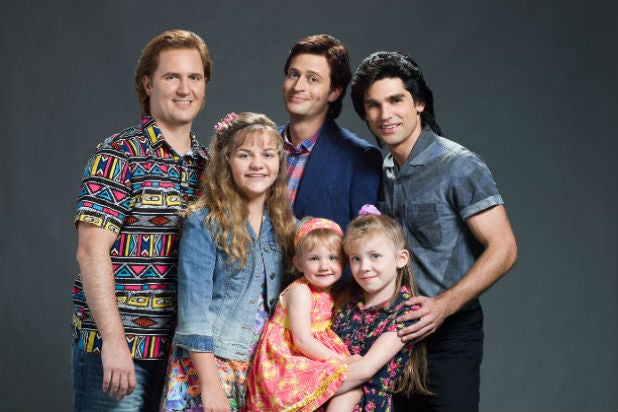 The cast and creators of “Full House” took to social media on Saturday night to poke fun at Lifetime’s airing of “The Unauthorized Full House Story.”

Candace Cameron Bure, who recently told TheWrap she would not be watching the TV movie, seems to have changed her mind when she tweeted simply, “So bad. Just so bad.” Her co-star Andrea Baber, known to fans of the show as Kimmy Gibbler, echoed Bure’s sentiment when she tweeted, “Anything good on TV tonight?”

John Stamos and series creator Jeff Franklin also took a few jabs at the behind-the-scenes story of the popular sitcom. Fans jumped into the mix as well, saying they thought the Lifetime movie was “ridiculous” and “weird.”

Viewer response was equally strong, with fans tweeting comments such as “cringe worthy” and “awkward.”

So bad. Just so bad.

Good luck tonight @JMichaelGaston – Hope you have as much fun being me as I do. #UnauthorizedFullHouseStory

Basically I’m going to be making this face all night. pic.twitter.com/j0yG1PkxHN

Anything good on TV tonight?

About that lifetime movie. Not so good. And for the record, I never had a fight with bob Saget. But at least they spelled our names right!

I’m really hoping for a scene where Jodi is in some crackden smoking meth. That would really make this #UnauthorizedFullHouse

Only 10 mins in but this #UnauthorizedFullHouse movie is awkward…or something…I don’t really know. Lol

The acting in this movie is awful oh my god #UnauthorizedFullHouse

I could only watch 20 min of #UnauthorizedFullHouse …..it was THAT bad.

The #UnauthorizedFullHouse movie was so weird, like it didn’t feel right 🙁

Because it’s so ridiculous and I can’t turn away. #UnauthorizedFullHouse