Jessica Biel gets herself into deep trouble as Candy Montgomery — who may or may not be involved in the death of her best friend — in the trailer for Hulu’s new true crime series “Candy.”

The show follows Biel’s Candy, a 1980s housewife and mother, who is seeking freedom from conformity in her life, taking up an affair with her friend’s husband.

But, when Lynskey’s character ends up dead, suspicion falls on Candy. 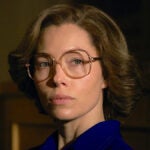 It will launch on Hulu Monday May 9, and air across five nights. The finale airs May 13.

Veith and Uppendahl are executive producers alongside Nick Antosca (“The Act,” “Brand New Cherry Flavor”) and Alex Hedlund for Eat the Cat, and Biel and Michelle Purple (“The Sinner,” “Cruel Summer”) for Iron Ocean. Jim Atkinson and John Bloom will serve as consulting producers. The series hails from UCP, a division of Universal Studio Group, and 20th Television, one of the Disney Television Studios.