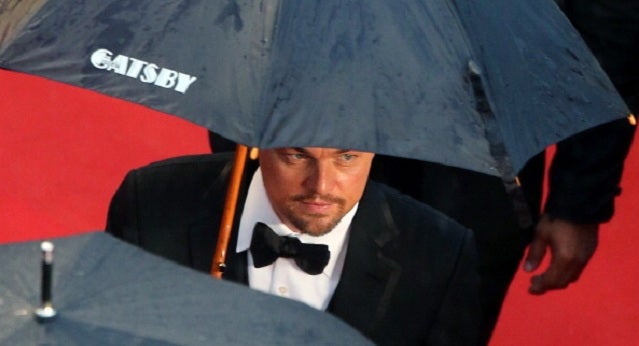 “I hope this isn’t the new normal,” commiserated one film executive, picking her way through the puddles on the rue d’Antibes after noting that this is the second year in a row of constant downpours.

The sun finally broke through on Sunday, leaving grumpy paparazzi and pushy police in its wake, part of the ritual Cannes experience. Still, when people travel this far to stay in $500/night hotel rooms for weather this bad, the movies had better be worth it.

Enthusiasm has been strongest for “Inside Llewyn Davis,” a delicate drama by the Coen brothers limned with their signature dark humor. The movie, which debuted on Saturday, stars the unknown Oscar Isaac as the folk singer of the title, who rubs elbows with success in the Village scene of the early 1960s. But he manages instead to veer back into obscurity, even as Bob Dylan began to haunt the same bar stools. The joy of the film is not only a deeply authentic performance by Isaac – playing guitar and singing complete songs soulfully – but a menagerie of supporting characters from the Coen brothers' delightful imagination. Those includes Justin Timberlake as a pro-forma folk singer; Carey Mulligan as his profane and generally furious girlfriend; John Goodman as a garrulous jazz musician; and Garrett Hedlund as the same character he played in “On the Road,” a silent/sexy chauffeur channeling James Dean.

Isaac said the shoot was filled with laughter, despite his character's litany of failures. “The more in pain I would be, the more they would laugh,” he said at the press conference. “There was a lot of laughter. It can be such a melancholy film. For me, in between takes I was smiling from ear to ear.”

There was some discussion about where the movie came down on the question of why the main character couldn’t break through as an artist. The movie is about “the character’s tortured relationship with success,” said Ethan. “It’s an interesting question, one we weren’t interested in answering.”

Said Timberlake: “You could argue that Llewyn wants both — success and to fail.”

The Coen brothers won plaudits from the critics for their much-anticipated work, which was greeted with hoots of excitement as the lights came down at the press screening.

Two other films have strong buzz. One is the Japanese "Like Father Like Son," by Kore-Eda Hirokazu, about an architect who discovers his six-year-old son is not his son, that the hospital had given him the wrong baby years before.

Also read: Cannes Review: 'The Past' Is a Brilliant Meditation on Secrets & Lies Like his earlier work, “The Past” sneaks up on the viewer with an intensity that builds to a surprising wallop. “The Past,” which Farhadi wrote and directed, tells a story filled with emotional subtlety of a blended family caught in generational and cultural cross-currents and riven by secrets. It stars Berenice Bejo (photo right, with Farhadi) the French actress previously known as the grinning silent actress in “The Artist,” as an angry and at times unhinged mother and lover.

The buzz around the Croisette is that the film confirms Farhadi’s status as a modern master cineaste. But without major stars and played in French and Farsi, it will be a worthy challenge for Sony Pictures Classics, which just picked up the film after also handling “A Separation.”

Thus far the movie marketplace has underwhelmed. While American titles are doing brisk business in international sales, the American distributors themselves are barely buying anything. Open Road CEO Tom Ortenberg, sitting at lunch with his acquisition team at the Carlton Hotel, affirmed that he’d not be buying anything, having had a look at the wares.

It’s hard to blame him given the narrow window for commercial success of independent movies today. That state of affairs was on painful display in “Seduced and Abandoned,” a through-the-looking-glass documentary by James Toback, starring Alec Baldwin and Toback as themselves trying to raise money for a film at last year’s Cannes Film Festival.

The two protagonists visit every foreign finance guru at the film market – Mark Damon, Ashok Armitraj, Avi Lerner -to pitch their idea, with no success. They dine on yachts with Taki, Denise Rich  and a series of other billionaires, describing the plot as “The Last Tango in Tikrit” – i.e., Brando-esque sex during the Iraq war.

The documentary is entertaining, even if it misses a central story conceit: why would anyone think that audiences in 2013 want to see a movie with Baldwin having torrid, “exploratory” sex? The film will air on HBO, but it was Pirandellian to see it at Cannes a year after it was shot there.

Far from the water-logged and insanely crowded “The Hunger Games: Catching Fire” party on Saturday night was a quieter and uniquely elegant affair at the Hotel du Cap to celebrate an upcoming film by the world-renowned photographer Michel Comte. The film is called “The Girl from Nagasaki,” it's filmed in 3D and it features opera music along with a story about the aftermath of the nuclear attack. with crystal and boxed images in the middle of the table. The girls, in full costume, hairpieces and wearing masks, did not move a muscle throughout the dinner.

The evening was organized by Resolution CEO and longtime agent Jeff Berg, who in welcoming everyone heralded the film as a “revolutionary” experience.

The crowd was an unusual mix of journalists, distributors, friends – with the itinerant billionaire Nicolas Berggruen there (with two dates) to spice things up further.

The movie is finished, but it is not screening in Cannes. Comte said it will go to Berlin or another festival later in the year. “Every movie has a personal connection,” he said, in explaining his desire to make a feature after a career in photography. His wife’s grandfather survived Hiroshima. “Our movie starts with the bomb in Hiroshima. And then goes to the 1970s.”