Spike Lee, the president of the jury at the 2021 Cannes Film Festival, accidentally announced that Julia Ducournau’s “Titane” won the Palme d’Or in what were supposed to be his opening remarks at the awards ceremony. The revelation rocked the crowd inside the Grand Theatre Lumiere, and set social media abuzz at the beginning of a ceremony that traditionally ends with the crowning of the Palme winner.

His slip-up came when a ceremony host, French actress Doria Tiller, asked Lee, “Can you tell me which prize is the first prize?” Lee got to his feet, and instead of telling her that the best actor award would be the first one handed out, said, “Yes, I can. The film that won the Palme d’Or is ‘Titane.'” Fellow juror Melanie Laurent reached for Lee and shouted, “No!” while other jurors laughed or buried their faces in their hands.

At the end of the ceremony, when it fell to Lee to officially announce what he’d already let slip, he said, “I know I took a lot of suspense out of the night. It wasn’t on purpose.”

After the ceremony during the jury press conference, Lee apologized again for the blunder.

“I have no excuses. I messed up,” he said. “I’m a big sports fan. It’s like the guy at the end of the game in the foul line, he misses the free throw, or a guy misses a kick. I was very specific to speak to the people of Cannes and tell them that I apologize. They said forget about it.”

“Titane” would have been a bold and provocative win under any circumstances because “Raw” director Ducournau’s film is far more daring, violent and sexual than the usual Palme d’Or winner. The film stars Agathe Rouselle as a kinky 32-year-old serial killer who, to escape the police, pretends that she’s a 19-year-old boy who has been missing for years, and persuades that boy’s father (Vincent Lindon) that she’s his long-lost son.

It’s a horror movie of sorts, albeit one with lots of sex. As Ben Croll wrote in his review for TheWrap, “Ducournau’s follow-up to ‘Raw’ is more than comfortable in its genre trappings, offering grab bag nods to past masters and positively delighting in sex, violence and grisly prosthetics as it chants ‘Long live the new flesh’ from the film world’s toniest perch, inviting all gathered to join along.”

The win makes Ducournau only the second female director to win the Palme d’Or, after Jane Campion for “The Piano” in 1993. (Actresses Lea Seydoux and Adele Exarchopoulos were specifically named in the Palme citation for “Blue Is the Warmest Color” in 2013, but that film was directed by Abdellatif Kechiche.) “Titane” also becomes the second consecutive victory for a film distributed by Neon, which also had 2019 Cannes (and Oscar) winner “Parasite.”

Asghar Farhadi’s tense moral drama “A Hero” and Juho Kuosmanen’s slow-paced “Compartment No. 6” shared the Grand Prize, which goes to the second-place film. “A Hero” will be distributed in the U.S. by Amazon, while “Compartment No. 6” was acquired by Sony Pictures Classics after its Cannes premiere.

Caleb Landry Jones was named winner of the best actor award for his performance as a real-life mass shooter in Justin Kurzel’s “Nitram.” Renate Reinsve won the best actress prize for Joachim Trier’s “The Worst Person in the World.”

The best director prize went to Leos Carax for the opening-night film, “Annette,” a musical starring Adam Driver and Marion Cotillard with songs by the band Sparks. The screenplay award went to writer-director Ryusuke Hamaguchi for his Haruki Murakami adaptation “Drive My Car.”

The Camera d’Or, which goes to the best first film in any section or sidebar of the festival, was given to Croatian director Antoneta Alamat Kusijanovic’s “Murina,” which screened in the independent Directors Fortnight sidebar.

The jury’s choices were for the most part bold ones, alternating between graphic and daring (and slightly bonkers) films like “Titane” and “Annette” and slow and daring ones like “Memoria” and “Compartment No. 6.” The three American films from directors Wes Anderson, Sean Baker and Sean Penn did not win anything, and neither did Paul Verhoeven’s sexually explicit and well-received “Benedetta.”

This year’s Main Competition section included 24 films, the largest number of films that has competed for the Palme d’Or since 1974, when 26 did. Three of the directors in competition — Weerasethakul, Jacques Audiard with “Paris, 13th District” and Nanni Moretti with “Three Floors” – are previous Palme d’Or winners. 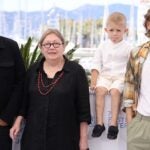 The Cannes Film Festival did not take place last year, so no awards were handed out. In 2019, the Palme d’Or went to Bong Joon Ho’s “Parasite,” which became only the second movie ever to win the Palme and then go on to win the Oscar for Best Picture. The first was “Marty,” in 1955. (At the first Cannes, in 1946, the top award was called the Grand Prix, and 11 different films tied for the honor; one was “The Lost Weekend,” which also won the Oscar.)