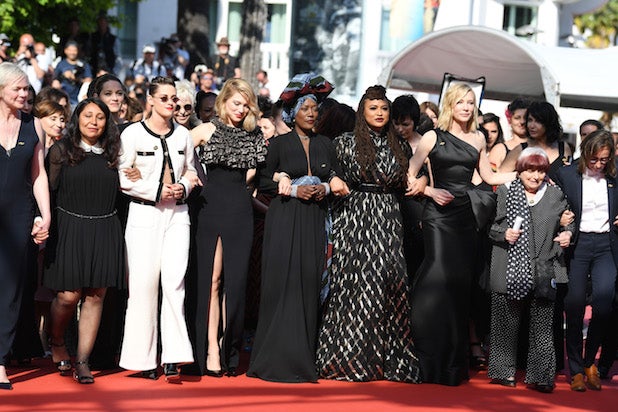 The Cannes Film Festival and its two main sidebars signed a pledge on Monday to bring more films by women filmmakers into the lineup of international film festivals.

Cannes general delegate Thierry Fremaux, Directors’ Fortnight artistic director Edouard Waintrop and Critics’ Week head Charles Tesson became the first signatories of the Programming Pledge for Parity and Inclusion in Cinema Festivals, which was drawn up by the French gender-parity group 50/50 by 2020.

The signing took place in a tent near the beach in Cannes on Monday, where the festival representatives met with gender-parity groups from five different countries, including Time’s Up in the U.S. and U.K.

The pledge, which will now go to additional film festivals around the world, does not require that the festival books a specific percentage of films directed by women, though it was drawn up to produce that effect.

According to Screen Daily, which published details, the document calls for the festivals to push for parity on their executive boards, compile statistics on the gender of the filmmakers and key crew members for all submitted films and increase the transparency of the selection process by publicly announcing selection committee members.

In the past, Fremaux had gone on record supporting affirmative-action-style moves to increase the number of women involved in the process, but had opposed the enforcement of any kind of gender bias in the selection of films for the festival.

The move came two days after a protest on the red carpet by 82 women (photo at top), at which Cannes jury president Cate Blanchett and iconic French director Agnes Varda read a statement that began, “Women are not a minority in the world, yet the current state of our industry says otherwise. As women, we all face our own unique challenges, but we stand together on these stairs today as a symbol of our determination and commitment to progress.”

Only 82 women have had films in the main competition in the 71 years of the festival, compared to more than 1,600 men.

One woman director, Jane Campion, won Cannes’ Palme d’Or award for “The Piano” in 1993. Actresses Adele Exarchopoulos and Lea Seydoux were specifically singled out to share the Palme with their male director, Abdellatif Kechiche, for 2013’s “Blue Is the Warmest Color,” but the prize officially went to Kechiche.

One woman, Varda, has won the Honorary Palme d’Or, which has been presented seven times over the last 17 years.

French Minister of Culture Françoise Nyssen also took part in the event on Monday, and announced a three-day international conference for equality to take place in Paris in June.

Nyssen also made note of Harvey Weinstein’s role in creating the outrage that gave the movement impetus. “Let’s make Weinstein an opportunity for the cinema to be revolutionary,” she said.

At the end of the signing ceremony, the audience sang “Happy Birthday” to Cate Blanchett, who was in attendance.