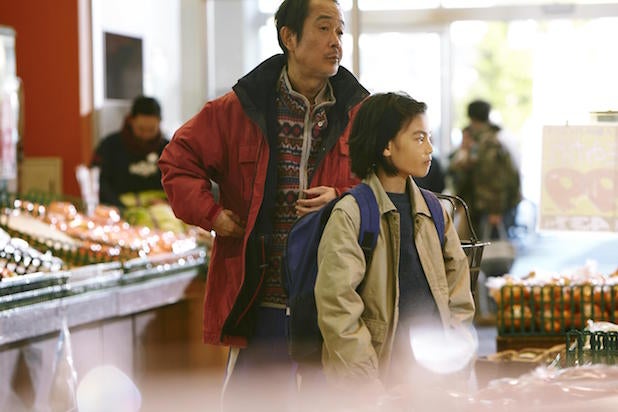 Hirozazu Kore-eda’s “Shoplifters” has won the Palme d’Or as the best film at the 2018 Cannes Film Festival.

The film was the seventh by the Japanese director to screen in Cannes, and the first to win the festival’s top prize. The story of a close-knit family who live on the edge of homelessness and resort to petty crime to stay alive, the film won near-unanimous raves since it debuted midway through the festival.

In his review at TheWrap, Ben Croll called the film “his richest film to date” and added, “Not only does ‘Shoplifters’ skillfully entwine several disparate threads he’s explored over his prolific career, it does so with the understated confidence and patient elegance of an artist who has fully matured.”

Spike Lee took the runner-up award, the Grand Prize, for his explosive and barbed film about a black policeman who infiltrated the Ku Klux Klan, “BlacKkKlansman.”

Nadine Labaki won the Jury Prize, essentially third place, for “Capharnaum,” a tale of a young boy who sues his parents for bringing him into a hard world.

French cinema legend Jean-Luc Godard won a special Palme d’Or for “Image Book,” his experimental essay in sound and image. The first such award in Cannes history, it was given, said jury president Cate Blanchett, for the 87-year-old director’s “continually striving to define and redefine what cinema can be.”

Pawel Pawlikowski won the best director award for “Cold War,” his decade-spanning drama about a troubled romance set in the aftermath of World War II.

The screenplay award was a tie between Alice Rohrwacher for “Happy as Lazzaro” and Jafar Panahi and Nader Saeivar for “Three Faces.”

“Girl,” a drama about a transgender teen directed by Belgian Lukas Dhont, won the Camera d’Or, which is given to the best debut film from any section of the festival.

The film that was the clear favorite of critics at the festival, Korean director Lee Chang-dong’s “Burning,” did not win anything. That marks the second time in three years that a Cannes jury headed by an Australian opted not to award a film that had set a new record for the highest score in the history of ScreenDaily’s Cannes critics’ poll.

In 2016, “Toni Erdmann” set a record in that poll but was ignored by the jury headed by Australian director George Miller.

Three were directed by women: Eva Husson’s “Girls of the Sun,” Rohrwacher’s “Happy as Felice” and Nadine Labaki’s “Capharnaum.”

In the 71-year history of Cannes, only one woman, Jane Campion, has won the Palme d’Or — and she did so in 1993 for a film, “The Piano,” that tied with Chen Kaige’s “Farewell My Concubine” for the award.

In addition, Agnès Varda was awarded an honorary Palme d’Or in 2015, while actresses Lea Seydoux and Adele Exarchopoulos were singled out in 2013 when “Blue Is the Warmest Color” won the Palme, though director Abdellatif Kechiche was the official winner of that award.

Going into Saturday’s ceremony, Rohrwacher and particularly Labaki were considered strong contenders to become the second woman to win the award.