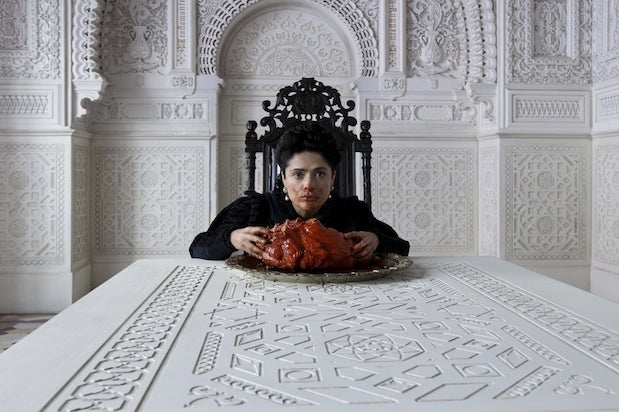 Matteo Garrone is one of the most talented directors working today who American audience have never seen or heard of.

His new film, “Tale of Tales,” his first film shot in English, is screening in competition and is one of the most talked-about at the festival. It is a sharp departure from his previous, contemporary stories, a visually stunning set of fairy tales about kings and queens and their most passionate desires – whether for children, or sex, or love or honor. The outstanding cast includes Salma Hayek as a childless queen and John C. Reilly as her king; Vincent Cassel as a lecherous king lusting for more; Toby Jones as a clueless king who marries his daughter (Bebe Cave) to an ogre.

TheWrap’s editor Sharon Waxman sat down with Garrone to explore his latest work and learn what motivates him as a filmmaker.

SW: I thought “Reality” was incredible, and I was entranced by “Tale of Tales,” but they are very different.
MG: “Reality” starts from an observation of contemporary reality and tries to translate it into a more fantastic dimension. When we made “Tale of Tales” it was the opposite journey. We start from a magical tale and bring to it realism. In all my movies there is a fairy tale dimension.

Why?
It is connected to my sensibility. I was a painter before I was a director. When I decide to make a movie it’s always because I like the characters, the story, but also because there is visual potential. My artistic journey is coherent. What I’m interested in is human conflict, the violence, the love, the obsession of the human being. When we talk about fairy tales, they work on archetype. They are modern, and close to the human experience, with feelings pushed to the extreme.

Did you write this movie?
The book “Tale of Tales” was written by a 17th century author called Giambattista Basile. It’s the first book written in Europe about fairy tales. He wrote about Cinderella, Sleeping Beauty, which we know about from the Grimm Brothers, which comes two centuries after.
Even in Italy Basile is not so known. We took three of 50 stories, and decided to see the point of view of the woman in three different ages. We tried to cover three different themes, of desire pushed to the extreme. That’s how it started.

How did you find it?
A painter friend of mine told me about the book. I was shocked – it was familiar to me, the mixing of reality with fantastic. Mixing comedy and tragedy, the grotesque.

How long were you a painter?
Until I was 26. I started making movies for fun. I don’t paint anymore – I can’t. I can’t one day paint and one day cinema.

This film is very painterly, I’m still thinking about it every day.
Goya was an inspiration…

The opening scene with Salma Hayek and John C. Reilly in that tableau of a Spanish royal court is so beautiful.
We wanted to go back to the beginning of cinema, to create an emotional journey and to astonish visually. It’s a movie that needs a free approach from the audience.

It made me think of Guillermo del Toro‘s “Pan’s Labyrinth.”
Much of the way we worked, and the special effects, were in the direction of Guillermo del Toro. We wanted a monster that would be real on the set, not all digital. The sea monster is real, with some digital integration. The movie is very carnal, material.

Technically this movie was different too?
Yes, but the approach to human character is the same.

Why did you shoot it in English?
Because Basile is an author that has something in common with Shakespeare. He’s very Shakespearean. I thought the English could help the film be known to largest possible audience. It’s written in Napolitan dialect, which in Italy no one can read.