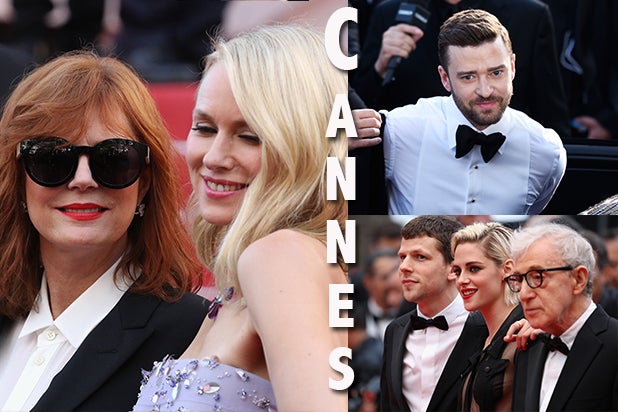 As the 69th annual Cannes Film Festival got underway on Wednesday night, with Woody Allen‘s “Cafe Society” amidst a noticeably militarized security presence on the ground, celebs like Justin Timberlake, Eva Longoria, Naomi Watts, and festival talent like Kristen Stewart and Jesse Eisenberg were the first big names to hit town.

Over the next 10 days away from the Palais, boldfacers from media markets across the world will bless a round-the-clock series of increasingly private, luxurious and elite social gatherings.

Here are TheWrap’s picks for the most choice invites to have packed in your suitcase. All events are private and by invitation only, so don’t blame us when the French security guard ignores you pointing at your questionable confirmation email on your phone, leaving you pining for the relative babyface treatment of Hollywood door-minders.

amfAR
Thursday, May 19; Hotel du Cap – Eden Roc
This is the “dayenu” of Cannes parties: If you do this AIDS fundraiser, it is enough. You have done Cannes.

There are eight figure art auctions, dozens of super models, trips to space with Leonardo DiCaprio, and the world’s wealthiest and most beautiful in an impossibly beautiful seaside location down the end of a quiet street 30 minutes away from the buzz of the Croisette. Just two years ago, a then under-the-radar model Gigi Hadid strolled the carpet in relative anonymity.

Now, they burnish the celebratory side of film festival festivities with a joint bash for “Cafe Society,” “Gimme Danger,” “Paterson,” “The Handmaiden,” and “The Neon Demon.” Silencio, the David Lynch designed members-only club in Paris, once again pops up in Cannes for the festival playing host to Amazon Motion Picture chief Ted Hope‘s bash for their five films at the festival.

As Sunday night turns in to Monday morning, word is that the Cannes equivalent of Eat24 will begin making rounds within the multi-room space, doling out pizzas, burgers, and other late night eats as a side course to all that champagne.

Hollywood Foreign Press Association
Friday night, May 13, 9 p.m.; Nikki Beach @ Carlton Beach Club
President Lorenzo Soria has been expanding the group’s presence at film festivals and living up to their “global” name with a footprint in Cannes. The Golden Globers will be matching any donation between $10,000 and $100,000 at this event, benefitting Filmaid International. As is their style, the HFPA has a solid talent list lined up for their beachside soiree.

David Unger and Three Six Zero Entertainment’s Helicopter-Required Luncheon
Sunday, May 15, 12 p.m.; Location Undisclosed
The entertainment division of the music management company (Calvin Harris, Deadmau5) thrills with an invite that requires guests to be whisked away via chopper for a Sunday afternoon — because yachts are so 2013.

Robert De Niro Tribute and Usher with “Hands of Stone”
Monday May 16, Midnight-2:30 a.m.; Nikki Beach @ Carlton Beach Club
Before the Weinstein Company debuts the Roberto Duran boxing drama back here in the U.S. in August, former Cannes Jury President Robert De Niro returns to Cannes for a special advance screening, and a late night party to follow. Co-star Usher is inbound to the south of France for this one.

Focus Features
Friday, May 13, 5-7 p.m.; Baoli Beach
Focus has the Jeff Nichols interracial marriage drama “Loving” in competition at the festival, a film that is slated for an awards season run in the states for a November release. Ruth Negga and Joel Edgerton star.

Michael Kives and Jamie Reuben Villa Party
Sunday, May 15, 9 p.m. – Late
CAA talent agent Michael Kives pairs with Jamie Reuben, from a family of British aluminum and property tycoons, who has established his own real estate business. The list here is tight, and the scene more elusive than the competing Amazon bash on Sunday night.

Disney’s “The BFG” Cannes Beach Party
Saturday, May 14, 9 p.m.
“From the human beans that created ‘E.T.’ and the author of ‘Charlie and the Chocolate Factory’ and ‘Matilda’ the invitation reads, while also warning would-be guests that mere possession of the Evite on your screen “does not give you access to the party.”

Vanity Fair
Saturday, May 14
The glossy that perpetuates its aura of mystery and exclusivity with a wink while furiously feeding out social media from behind their own ropes in real time, humbly describes their event in their own editorial coverage this way: “regularly referred to as the best Cannes party — not that we are partial.”

*Industry Heavy*
IMDb Dinner Party
Monday, May 16, 7 p.m.; Restaurant Mantel
Everyone who programs a festival, critiques films and logs their own movie database in their head knows IMDb founder Col Needham. His guest lists reflect that. At Sundance, Needham’s room-wide dinner poll included “Favorite Films by Female Directors” and “What movie do you lie about having seen?”

Bootsy Bellows (Cannes and Monaco)
Friday and Saturday, May 20-21 at VIP Room (Cannes) and May 26 at VR (Monaco)

VIP Room is big, brash, and Vegas-y. The L.A. guys are dealing from multiple decks here with the sleek fashion of Mia Moretti and partner Markus Molinari’s birthday one night and more grit with rapper Tyga the next. They then port the party eastward for the Monaco Grand Prix after the festival wraps.

Richie Akiva, Ronnie Madra, and Darren Dzienciol base extends to the south of France, regularly throwing amfAR after parties and partnering with his foreign analogs for bashes. They are taking a two-tier approach this year. Local club Gotha hosts traditional 1Oak nights around midnight with Steve Aoki and Chris Brown on the docket, but the Sunset strip’s big room presence will be distilled at nine nights of after hours from 3am onwards at the Palm Beach Casino

Nathalie Dubois DPA
By Appointment Only
May 11-20, Multiple Suites at the Carlton

France native Dubois tragically lost her brother in the Bataclan terrorist attack last Nov. 13. A regular on the international festival scene and known in Hollywood for her suites around the Golden Globes, she is dedicating this production to “all victims of terrorism” and shining a light on the response group, “Life for Paris.” She also earns a suite record with a nine day production. If you want stuff from around the world, go here.

GBK
Sunday, May 15-Monday, May 16
Hotel Martinez
Coolest swag on the menu: Room-filling speaker systems masquerading as art you hang on the wall (Soundwall), future travel accommodations from Belmond, some sort of anti-aging face-lift-in-a-tube called “Lifecell”, and a shlep it all home bag from a female boxer-turned-Columbia MBA.