There are no zombies on the red carpet of the Croisette, a reporter told Bill Murray after the world premiere of his latest film “The Dead Don’t Die,” which opened the Cannes Film Festival Tuesday.

“Says you,” Murray (un)dead-pans in response.

During the press conference following Jim Jarmusch’s zombie comedy, Murray said he finds Cannes “frightening,” and it’s hard not to come away with that assessment when “The Dead Don’t Die” managed to bring together an unusual assemblage of art-house darlings and global pop stars for the occasion.

Jarmusch donned his trademark sunglasses on the red carpet and received a (expected) standing ovation as the screening was began, and he was joined by the film’s diverse crop of stars, including Adam Driver, Tilda Swinton, Chloe Sevigny and even Selena Gomez, who were all in attendance.

And the film itself is a nonchalant, hipster commentary on people sleepwalking through the modern age as well as the Trump era. A red hat worn by Steve Buscemi’s character in the film that read “Make America White Again” was a popular talking point among critics after the first screenings in the Grand Theatre Lumiere and the Sally Debussy theater next door. And it’s not unusual for this generally tough Cannes crowd to be fairly mixed on the splashy opening night film, even for someone as respected as Jarmsuch.

“It’s the self-awareness that really hurts it,” TheWrap’s critic Ben Croll wrote in his review. “Jarmusch knows that his audience wants to see Murray and Driver riff in deadpan and that the image of Swinton strutting down the street wielding a katana will set the internet ablaze, so he offers them as much, without ever feeling the imperative to go a step beyond.” 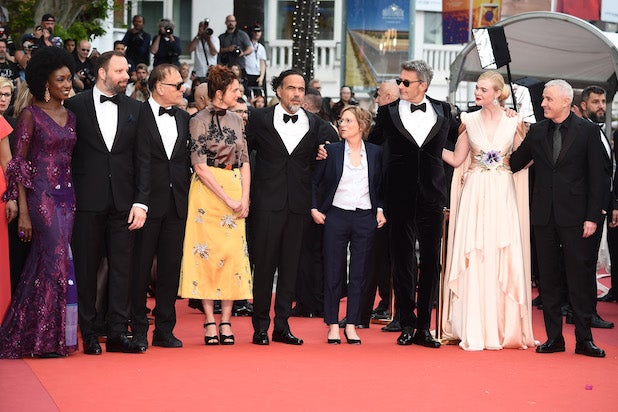 Elle Fanning, filmmakers Kelly Reichardt and Alice Rohrwacher, and Senegalese actress Maimouna N’Diaye are among the women serving on this year’s Cannes main competition jury led by Alejandro González Iñárritu. The group represents one of the most diverse juries the festival has ever had, with 21-year-old Fanning the youngest jury member the festival has ever had.

And while the festival has been committed to striving toward 50/50 gender parity, the women on the jury would very much like to move past the same questions about being a “woman” filmmaker.

“I look forward to a time that will come when we don’t have to say ‘women directors’ or ‘as a woman,'” Reichardt said at the press conference Tuesday.

“But it’s odd when we’re asked this question,” Rohrwacher added. “It’s sort of like asking someone who survived a shipwreck why he’s still alive. Everyone is on the beach — ‘Why are you still alive?’ Why are you asking us? Well, ask the person who built the boat, who sold the tickets, the schools. People have said there haven’t been enough women, but it’s not enough to talk about at the end [of the chain]. We have to look at the beginning of the chain.”

Also Read: Cannes Market Preview 2019: What Are Buyers Looking for This Year?

The Cannes marketplace is also just kicking off at the festival, but select international deals are already in place for some of the competition films.