Forget art and fashion — the second day of the 2016 Cannes Film Festival was all about cash, as Julia Roberts and George Clooney showed in support of the Jodie Foster-directed “Money Monster.”

A crush of media arrived to the Croisette to capture presumed magic between festival virgin Roberts and co-star Clooney, whose socially conscious thriller premieres Thursday out of competition.

Roberts, doing her take on Wall Street types in a pinstripe pantsuit, remarked to the press conference that Cannes was “crazy.” Critics who screened the reteaming of the “Oceans Eleven” duo weren’t as enthused.

Also Read: Woody Allen on Cannes Rape Joke: 'I've Had Worse Things Than That Said About Me'

Foster’s first feature as a director since 2011’s “The Beaver” drew many comparisons to last year’s Oscar darling “The Big Short,” for better and for worse.

“Despite its obvious conservatism, and its outrageous silliness, it is actually more clear-sighted and certainly less pompous than the hugely overrated Oscar-winner and liberal dinner-party favorite ‘The Big Short,'” wrote The Guardian’s Peter Bradshaw.

Clooney plays an overblown cable financial guru and Roberts his weary executive producer, both of whom are thrown into a tailspin by a scorned Jack O’Connell — a blue collar type whose life savings are eaten in a shady investment deal, who arrives to the show’s set packing heat.

The film “stays rather small and fictional in its aim. It’s partially interested in the idea of systemic corruption in the finance world, sure, but it seems to be even more critical of the cable news media types who have grown soft, complacent and careless,” wrote the Associated Press.

“I don’t need my thrillers to behave like documentaries, but after a strong and confidently paced set-up, the hostage situation — which requires a lot of cross-cutting between the studio and the NYPD’s attempts to defuse and resolve that situation — struggles to maintain momentum and credibility,” the Chicago Tribune’s Michael Phillips said.

Sadly, the movie’s U.S. box office forecast is nothing to brag about in the financial sector. “Money Monster” is looking at an $8.9 million opening weekend, per BoxOffice.com. It opens Friday.

Elsewhere on the Croisette:

“Staying Vertical” is an early head-turner in film competition

In what one social media user described as “the first WTF film of Cannes,” Alain Guiraudie’s latest “Staying Vertical” inspired plenty of chatter. The bold director of surreal, psychoanalytical Cannes drama “Stranger By the Lake” returns with another sex-driven romp.

This time it’s about a blocked screenwriter (Damien Bonnard) who visits the country seeking inspiration. What the film finds instead is graphic heterosexual sex, an extended closeup of childbirth, more sex, and a final scene (spoiler alert!) in which our hero sodomizes an old man to death (one review compared the act to euthanasia, others said both parties were just looking for a good time).

I love that reviews of Staying Vertical refer to Stranger by the Lake as accessible.

STAYING VERTICAL (Alain Guiraudie): Aka STRANGER BY THE MINUTE. #Cannes

STAYING VERTICAL: Description made this sound sentimental, but it's a feverishly bizarre movie about men without women that I dug. #cannes

Alain Guiraudie's Staying Vertical is beautiful & flat-out bizarre. I can't get it out of my head. And what a terrific title. #Cannes2016 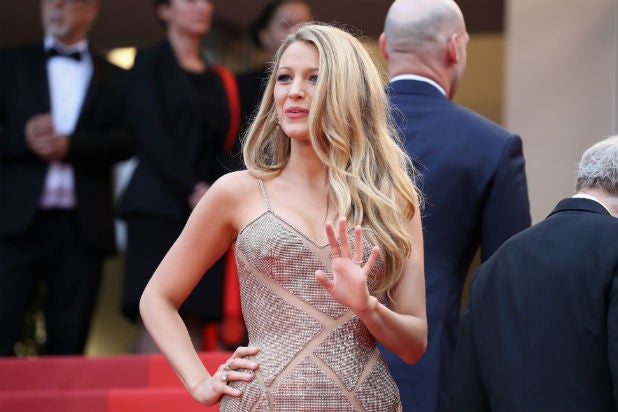 Perpetual ray of luxurious sunshine might want to take some advice from and bring the #AskHerMore movement from the red carpets of America to the French Riviera.

The actress is a Cannes mainstay as a brand ambassador for L’Oreal Paris, but this year she’s also a part of the ensemble cast of Woody Allen‘s “Cafe Society.” Some reporters noted that at a lengthy press conference that included director Allen and stars and , Lively wasn’t called on at all.

Her red carpet looks, however, are widely disseminated. Whatever her function at Cannes, Lively said she was thrilled to be in town during a luncheon for the Amazon Studios project, having come before with husband Ryan Reynolds.

New Comcast property DreamWorks Animation was accounted for at Cannes via two of its voice actors — Anna Kendrick and Justin Timberlake.

While the film, populated by the oddly charming plastic fashion dolls of the ’90s, won’t hit the States until November, you can see Kendrick and Timberlake belt an adorable version of Cyndi Lauper‘s “True Colors” below.

TheWrap will truly be covering the entire Cannes Film Festival, keep up wth us here.