The Cannes Film Festival has reported an average of three positive COVID test results per day, but French actress Lea Seydoux might have to cancel her trip to the LA Croisette altogether as she tested positive and is currently self-isolating in her Paris home.

At the star-studded event, however, things are moving along as Paul Verhoeven’s “Benedetta” made waves and received positive reviews, while “La Fracture” also received a standing ovation longer than five minutes.

And the red carpet is looking stellar as ever, as A-list celebrities tout their best looks after being stuck at home for the better part of the last 16 months. The color pink seems to be this year’s go-to color, according to Spike Lee and Josh O’Connor.

See below for TheWrap’s roundup of what happened at the festival on its fifth day. On Saturday, Sean Penn’s “Flag Day,” starring his daughter, will premiere.

According to multiple media reports, the French actress tested positive for COVID and may have to cancel her trip to Cannes despite having four films, three of which are in competition, at the festival. While a spokesperson for Seydoux has not yet responded to TheWrap’s request for comment, Variety reported that she is asymptomatic and has been self-isolating for over a week at her Paris home. She is fully vaccinated.

Seydoux is currently in production on a film, during which she contracted COVID. She is waiting for two negative test results before heading to the premiere of Wes Anderson’s “The French Dispatch” on Monday. Her other films at Cannes are Ildiko Enyedi’s “The Story of My Wife” and Bruno Dumont’s “France.” She also stars in Arnaud Desplechin’s film “Deception.”

The director premiered his lesbian nun drama “Benedetta” at the festival (and in French theaters) on Friday to a heap of praise.

TheWrap’s Ben Croll wrote, “In this two-hour film, within these four walls, the Dutch provocateur has managed to encompass all the themes and obsessions that have marked his five-decade, three-language career … ‘Benedetta’ is Paul Verhoeven’s most personal film.” 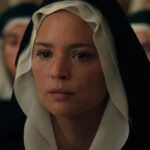 According to Twitter posts, Catherine Corsini’s “La Fracture” got a standing ovation at its premiere on Friday night. One viewer said the audience clapped for five minutes and called the film a “great surprise.”

“La Fracture” is about Raf and Julie, a couple who find themselves in a hospital, having nearly suffocated, on the night before a major demonstration.

Josh O’Connor, who is starring in “Mothering Sunday” alongside Olivia Colman at the festival, wasn’t the only one to wear a pink suit on the red carpet at the festival. Let’s not forget Spike Lee started the trend with his hot pink suit at the opening ceremony.

O’Connor wore pink again at the photocall for “Mothering Sunday” on Saturday.