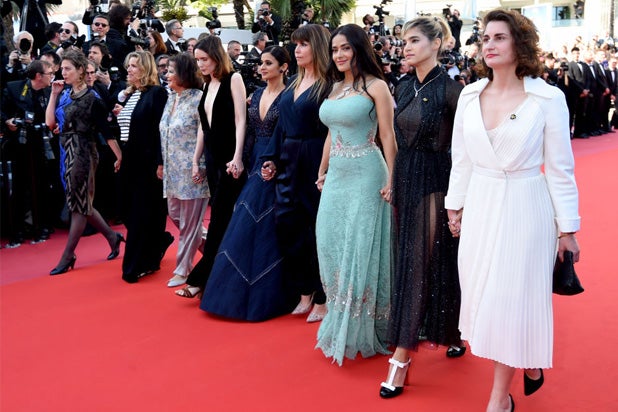 It’s raining in France as we reach the halfway point of this year’s Cannes Film Festival, where a gender parity conversation has taken center stage and filmmakers continue to serve up their wares.

Polarizing provocateur Gaspar Noe returned after his 3D sexcapade “Love” from 2015 — and managed to win over critics with a dance-infused horror film (we’ll still never forgive him for this poster).

When the “Beatriz at Dinner” star is wired with a mic, you can pretty much guarantee you’re in for some straight talk.

Hayek sat for a keynote conversation at the annual Kering panel about women in entertainment, where she first discussed the historic gesture made on Saturday by 82 women who stormed the Croisette in silence to protest the lack of equity in Hollywood.

Discussion turned to her harrowing account of working with Weinstein on a biopic of Frida Kahlo, where she said she relentlessly refused the disgraced producer’s advances and suffered emotional torture. It was one of the few accounts Weinstein responded to, notably to deny all accusations and express shock and disbelief.

“We are the easiest to get discredited,” Hayek said specifically of women of color, alluding to a similar account from Oscar winner Lupita Nyong’o. “It is a well-known fact. So he went back, attacking the two women of color, in hopes that if he could discredit us.”

Cannes has its share of black sheep and prodigal sons — like the returning tornado of Lars von Trier and the prolific and occasionally petulant Xavier Dolan. No different is Gaspar Noe, of the notably explicit and controversial “Love,” a graphic 3D love triangle tale that fully depicted a variety of sex acts on top of his narrative.

Now he brings “Climax” which, despite what the title suggests, is a not a sequel to “Love.”

It’s a trippy dance movie that evolves into a horror film, and it’s majorly won over critics. One described the film as a cross between Darren Aronofsky’s “mother!” and the “Step Up” franchise.

24 hours ago I would not have predicted that CLIMAX would be my easy favorite of fest, and yet here we are #Cannes2018 https://t.co/JBlXidOJDP

Here's the brand-new trailer for Gaspar Noe's CLIMAX, which just premiered at Cannes and I love it so much pic.twitter.com/GayY6A0iMC

Need to catch up on Cannes? Read TheWrap’s daily coverage: