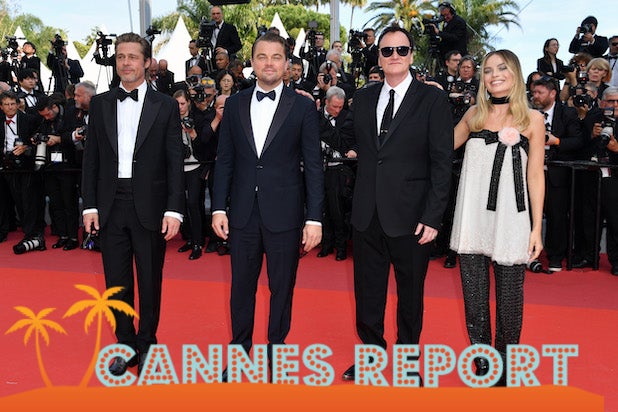 It was Tarantino day on the Croisette. Passholders were ecstatic to see the star power Quentin Tarantino brought to the red carpet along with his ninth film “Once Upon a Time…in Hollywood,” and the reception for the film was just as loud, delivering everything you would expect from a Tarantino film.

“It’s no spoiler (and probably no surprise, either) to say that “Once Upon a Time … in Hollywood” is big, brash, ridiculous, too long, and in the end, invigorating,” TheWrap’s Steve Pond wrote in his review. “It’s a grand playground for the director to further fetishize old pop culture, to break things and hurt people, and to bring a wide-eyed glee and a robust sense of perversity to the whole craft of moviemaking.”

At the press conference following the premiere screening, Tarantino remembered back to when he was just 6, saying he believes he was taken to the Spahn Ranch for horseback riding and may have even encountered the Manson Family.

“Even though there’s a sinisterness you see in the Spahn Ranch scene, I also wanted to show what their day-to-day life was like,” he said of a scene in the film in which Brad Pitt’s character visits. “I actually went horseback riding at 6 years old with my mom and dad. I don’t know if we went to Spahn Ranch. I like to think that we did.” A shrug. “We probably went to Griffith Park, but I like to think that we went to Spahn Ranch.”

Tarantino was also asked by a reporter about whether the movie depicted “rage against women.” According to THR, Tarantino deflected the question and said he was committed to avoiding spoilers, but the film’s stars backed him up.

It turns out Tarantino wasn’t the only one asking critics not to spoil the cinematic experience of his film. A week before Tarantino did the same, “Parasite” director Bong Joon-ho posted a similar open letter asking for critics writing reviews to refrain from posting spoilers that would ruin the surprises of the story, naming a specific moment in the film at which point critics should stop writing anything further.

“I believe it is all filmmakers’ hope that their audience will experience bated breath at every turn of the story, small and big, that they will be surprised and sucked into the film with burning emotion at every moment,” Joon-ho wrote of his film, which debuted on Tuesday in competition. “When you write a review for the film, please refrain as much as possible from revealing how the story unfolds after the brother and sister start working as private tutors, an event which is disclosed in the film’s trailer.”

“I bow my head and implore you once more — please refrain from spoilers,” he continued.

“Parasite” has earned comparisons to both last year’s Palme d’Or winner “Shoplifters” and Jordan Peele’s “Us” from earlier this year. It’s been called a drama and a “dark comedy” in TheWrap’s review, while Indiewire simply called it “unclassifiable” and that it may be among his best films.

“Parasite” tells the story of a fully unemployed family who finds themselves trapped in a series of strange, unfortunate events when the family’s son lands a job as a tutor for a wealthy family. Joon-ho ahead of the festival feared that the story might be too “hyper-local” and that he couldn’t imagine it winning the Palme.

But the jury led by Alejandro Gonzalez Inarritu might think differently, and after the film was greeted with a typically lengthy standing ovation, Joon-ho greeted the audience in both Korean and English.