To make Tony Stark look like his younger self in “Captain America: Civil War,” artists referenced Robert Downey Jr.‘s early filmography. They studied him playing mallrat bully Ian in the 1985 comedy “Weird Science,” as the best buddy of Rodney Dangerfield’s son in “Back to School,” and as a drug addicted rich kid in the big-screen adaptation of Bret Easton Ellis‘ “Less Than Zero.”

“We went a little closer to [his look in] ‘Less Than Zero,'” said visual effects supervisor Dan DeLeeuw during an interview with TheWrap this week. “No one wanted the spikey hair from ‘Weird Science’ like I did!”

DeLeeuw, who also worked on “Captain America: The Winter Soldier” and “Iron Man 3,” shared more astounding details about the three-minute Stark scene, as well as other surprising CGI secrets of “Civil War.”

More obvious digital stand-ins were used in the film’s pure-play action moves — like when Spider-Man is slinging his web and Falcon is flying. But they were also used when footage of the real actors simply didn’t work out, DeLeeuw told TheWrap.

“In the airport fight scene we needed Cap and Bucky [Barnes] to dash to the Quinjet. What we shot didn’t work so we went ahead and used digital doubles.”

A double was also used for Vision in that very sequence, when he flies over the fray.

Then there’s a surprising inverse approach for the movie magic tech that DeLeeuw revealed: “We matched the action Chadwick Boseman and his stunt performer did, and a double [was morphed] over it.”

2. Black Panther’s vibranium suit is CG-enhanced
“We found ways to make everything better,” said DeLeeuw, who noted that most of the film was computer-tweaked, including Panther’s suit. “The material needed to be a mix of cloth and shiny. We enhance it in post.” 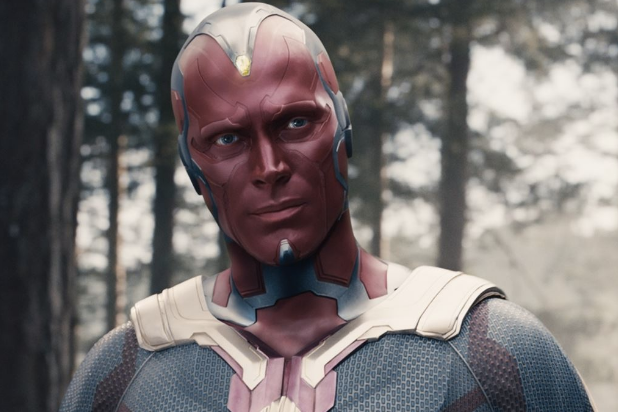 3. How much of Vision is CG? (Answer: Almost all of him)
On set, Paul Bettany wears magenta makeup and a specially made cap on his head bearing Vision’s familiar geometric metal top. The rest of his look is pretty much effects, according to DeLeeuw, down to the metal on his chin, the yellow gem on his forehead — Vision’s power source — and even the line features around his eyes. “We do a lot with digital faces now and are going to push the limit,” he said. “But with Paul his face is his. It’s more about what’s done on top of that, and his skin is digitally smoothed.” His entire head is also reshaped, but, added DeLeeuw, “Everything ties back to the performance … It’s not mocap (motion capture).”

4. Chris Evans is a savant at wielding invisible shields
Having played Cap more than five times now, Evans is something of an expert when it comes catching his invisible shield, to be added later in the post production process. “He has this uncanny ability to know what’s not there,” DeLeeuw said with a laugh. But sometimes effects artists decide the computer would do it better. “We cut off his arm and added a CG one in the final battle scene with Iron Man,” he said, explaining that limb replacement is pretty in action sequences.

5. Downey worked twice as hard
Artists utilized face replacement techniques, like those used to make Michael Douglas appear decades younger in an early scene in “Ant-Man.” But the level of difficulty involved in the 4,000-frame Stark sequence was much greater because, as DeLeeuw explained, there are two Tony Starks in the frame. If you recall toward the end of the scene, present-day Stark appears in front of the hologram of his younger self.

“It’s difficult enough to explain,” said DeLeeuw. “It’s even more difficult watching him do it.”

Shot in one day, the scene utilized doubles — one stand-in for the adult Stark, and one young performer depicting 20-something Stark. Downey had to play both parts, but only once with motion capture equipment attached to his face, when he played his younger self (opposite his older stand-in).

Downey had to mimic the movements of his stand-ins, repeating their performances. He completed the older Stark part first, then went to his trailer, shaved off his trademark superhero mustache and goatee, and played his younger self.

DeLeeuw guided Trent Claus and his effect team at Lola VFX to manipulate the Stark scene, which depicts a hologram of a memory in which the superhero magnate appears with his since-deceased parents.

“The great thing is [Downey’s] been in the business since the age he needed to be in the scene,” said DeLeeuw.

Artists did several passes to make him resemble his “Less Than Zero” days — each pass essentially de-aging Downey by a decade. “Each pass is sculpting in a way,” DeLeeuw told TheWrap. “Pulling off material, pulling off age … When it feels right, you go back and clean it up.”

And there, movie magic is made.