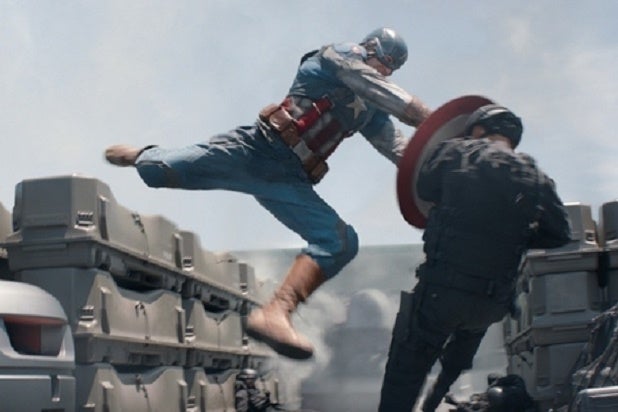 A disembodied Johnny Depp in “Transcendence” proved no match for “Captain America: The Winter Soldier,” as Disney’s superhero sequel steamrolled the competition for its third straight box-office win this weekend.

The Marvel Comics-based thriller starring Chris Evans and Scarlett Johansson brought in $26.6 million over the three days, raising its domestic total to $201.5 million and blasting past the $177 million total haul of the first “Captain America” movie in just just 15 days. That was enough to beat out Fox’s animated family film “Rio 2” at $22.5 million, as well as the surprising Christian drama “Heaven Is for Real.”

Starring Greg Kinnear as a small-town pastor whose son claims to have seen heaven after a near-death experience, Sony’s “Heaven Is for Real” was third for the weekend with $21.5 million and has taken in $28.5 million since opening Wednesday. It was the fourth faith-based film to score with moviegoers this year, coming on the heels of “Noah,” “God’s Not Dead” and “Son of God.”

The thriller, in which Depp plays a scientist whose brain is uploaded to a computer after an attack by anti-tech radicals, opened to just $11.1 million over the three days and finished fourth. It was the fourth box-office flop in a row for Depp, who hasn’t had a hit since 2011’s “Pirates of the Caribbean: On Stranger Tides.” Since then, last summer’s “The Long Ranger,” 2012’s “Dark Shadows” and 2011’s “The Rum Diaries” have all been duds.

The comedy “A Haunted House 2” opened in fifth with a disappointing $9,1 million for Open Road, while the DisneyNature documentary “Bears” cracked the top ten with a $4.8 million debut.

“Heaven Is for Real” drew an audience that was 62 percent female and 49 percent under the age of 35, and they loved it – giving it an “A” CinemaScore.

“I think the most significant thing here is that we connected with a mainstream crowd as well as faith-based audiences,” Sony’s head of distribution Rory Breuer told TheWrap. “I think people were drawn to the idea of real-life story that addresses a universal theme – the afterlife – and it sure didn’t hurt to have Greg Kinnear as our star.”

Expectations for “Transcendence, which was financed by Alcon Entertainment and and China’s DMG Entertainment to the tune of $100 million, were measured to begin with. But the PG-13-rated thriller — the directorial debut of Christopher Nolan‘s longtime cinematographer, Wally Pfister — came in nearly $10 million under pre-release projections.

The critics didn’t like “Transcendence” (19 percent positive on Rotten Tomatoes) and moviegoers agreed, giving it just a “C+” CinemaScore. The audience it attracted – 56 percent male and 56 percent over the age of 25 – suggests Depp was not a draw for young women.

The opening for IM Global’s low-budget R-rated horror spoof “A Haunted House 2,” which stars Jaime Pressley and Marlon Wayans, was well below the $18 million debut of the original last year. That one went on top make $60 million worldwide – on a $2.5 million budget.

And Summit’s teen sci-fi tale “Divergent” showed even more staying power. It took in $5.7 million — down just 22 percent from last week — to up its domestic total to $134 million in its fifth week.

“Noah” and “God’s Not Dead” finished ninth and tenth, to make it three movies targeting Christian audiences in the top ten.