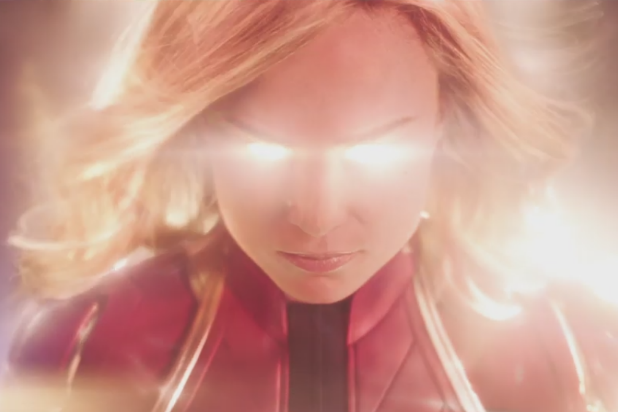 “Captain Marvel” is just a few days away from release, but how are critics responding to Marvel’s first female superhero film?

Pretty well, it seems. With more than 100 reviews, Anna Boden and Ryan Fleck’s blockbuster has a Rotten Tomatoes score of 85 percent. In her review for TheWrap, April Wolfe praised Brie Larson’s performance as the film’s titular heroine, selling a balance of warrior intensity and sly mischievousness.

“Larson’s energy, at first, is powered by a precocious kid-sister vibe, disobeying the rules but charming her way out of trouble. Carol’s arc is defined by shedding those bonds to that identity and to her mentor/father figure, speaking and acting with directness,” Wolfe writes.

“Larson’s quite capable of selling that oscillation of maturity without losing the humor of her character; she may be confident, but she’s still crafty and calculatingly playful. And what really sells this film is that playfulness.”

Not everyone was impressed, though. Associated Press’ Lindsey Bahr felt that the film did a poor job of establishing Captain Marvel’s personality and character arc.

“She is told at least 10 times in the first 10 minutes of the film that she needs to control her emotions,” she writes.

“This is a charged thing to say to a woman, but also confusing because ‘emotional’ is the last word I would use to describe the character as she’s presented. She’s more impulsive and bullheaded than anything else. Emotions and heart don’t seem to have anything to do with her decisions. At times it even seems like she’s channeling the Terminator.”

Check out some more reviews below.

Larson carries a difficult role with a grin and a swagger that matches Tom Cruise’s in ‘Top Gun.’ She’s perfectly cast in this nod to the ’80s and ’90s — and would make a great pairing with Ripley from ‘Alien’ and Sarah Connor in the ‘Terminator’ franchise. But her confidence is especially striking in that it does feel so alien. Like ‘Wonder Woman’ (and this is the only comparison you’ll get from me), she’s an outsider who doesn’t feel burdened by the constraints of normal women — she doesn’t even know to be concerned with them.

“The film struggles to truly break any new ground when it comes to representation. The film falls into the trope of introducing diversity through villainy, failing to build on some of the great cast. It’s also hard to ignore that the first woman to hold the mantle of Captain Marvel was a black woman named Monica Rambeau and though they pay homage and introduce the character played by the wonderful Akira Akbar–far too briefly–narratively there’s no reason that Monica couldn’t have been at the center of this story.”

“The raw material is all there, but filmmaking itself does not yield any truly thrilling, resonant moments. The action sequences are rote, at times almost muddled. A CGI set piece toward the end looks downright retro, and not in a cool, ’90s way. But, hey, there have been plenty of male Marvel stars have gotten totally serviceable vehicles — why can’t that be acceptable for a woman?”

“‘Captain Marvel’ continues to prove just how good the MCU is at expanding its universe in new ways that still feel integral to the larger world. Experiencing the film’s final moments is not unlike the experience of watching the final moments of ‘Rogue One,’ so cleverly does the film weave its way into existing canon, informing what has already happened in the franchise (and what will eventually happen in the world of the MCU) in emotionally-resonant ways. After ‘Captain Marvel,’ the MCU feels more complete.”

“Where the twenty-first entry in this expanding cinematic universe feels likely to make history is precisely in its lack of innovation: it is, and thankfully can be, just another superhero movie. It’s also better than that, but with Captain Marvel, directors Anna Boden and Ryan Fleck have managed to meet expectations driven by the films that preceded theirs and still create a rousing, fun superhero saga that earns the right to be viewed without needing conditions, asterisks or equivocation to evaluate its artistic worthiness – both alone and as a part of the MCU.”

The all-too-familiar MCU background palette of secret bases, spaceships, hangars, and underground complexes (but this time with crappier computers) contributes to the impression of anonymity. But at least the film has a sense of humor–admittedly faint praise, given how many of its predecessors in the MCU have been funny enough to qualify as ensemble comedies. Here, two characters strike up an unlikely partnership, whup alien ass, make some corny jokes, uncover secrets, and come to the conclusion that maybe, just maybe, superheroes are something the Earth needs. It’s everything you might expect a sci-fi superhero movie to be, if you hadn’t seen one in a long time.

“‘Captain Marvel’ lacks the heart of DC’s ‘Wonder Woman’ but makes up for it in sheer likeability. Its fight scenes could have benefited from more character and punch, yet are pleasingly trim – a world away from some of the franchise’s more elongated action. If the film’s feminist credentials are fairly subtly imparted throughout, then it builds to a furiously empowered ending which unleashes its heroine in a way that should surely place her at the forefront of the Avengers’ fightback. It’ll be interesting to see what comes next.”

Also Read: The First 'Captain Marvel' Reactions Are in: 'Well, Thanos Is F--ed'

“‘Captain Marvel’ isn’t a terrible movie. And Larson, a perceptive, low-key actor, carries the whole affair capably; she smiles just the right amount, which is not a lot. But she’s best in the quieter scenes […] the ones where she’s watching and listening to the performers around her, her face registering all kinds of emotional shifts. This brings us to the central problem of presenting superhero role models for girls on such a loud, booming canvas: These women are powerful (great!) but they’re rarely shown just being good at the ordinary things–like listening, or rendering thoughtful advice, or admitting they made a mistake–which are the things that make the real-life humans around us truly great.”

“The fact that the film takes place in the ’90s is a genius choice. The decade was a time where feminism was re-defining itself. It no longer reflected the bra-burning activism of our mothers; rather, ’90s feminism was about defining strength in womanhood, whether it be physically (à la Sarah Connor in ‘Terminator 2’) or tossing out the idea of an ‘emotional’ female (see: ‘Daria’) or simply, defining who you are (like Lelaina Pierce in ‘Reality Bites’). The multifaceted nature of womanhood is what sets Carol apart from all the heroes that came before her and it’s what makes her the strongest hero the MCU has ever seen.”

At first glance, the notion of a gifted young performer who is already in possession of a Best Actress Oscar turning up in the kind of jumbo-sized spectacle where demonstrations of nuanced acting chops usually don’t factor too heavily as part of the creative process may seem either patently absurd or slightly depressing. And yet, she is entirely winning and supremely entertaining throughout, bringing to this film roughly the same shot of pure personality that Robert Downey Jr. brought to the first “Iron Man” and that Gal Gadot lent to “Wonder Woman.”