Based on the book “An Unlikely Angel” by Ashley Smith, it’s a fictional version of the real events that occurred when Smith, a single mother and struggling addict, was held hostage in her home by escaped prisoner and multiple murderer Brian Nichols in Georgia in 2005.

The film version features Kate Mara (“Fantastic Four,” “House of Cards”) as Smith, a single mom in crisis. We meet her at a 12-step meeting, she’s late for work, she’s trying to keep her commitments to the daughter who doesn’t live with her anymore due to her addictions. One of her fellow meeting attendees keeps giving her a copy of celebrity pastor Rick Warren’s best-seller “The Purpose Driven Life,” but Ashley doesn’t have time for that stuff.

Meanwhile, in downtown Atlanta, Brian Nichols (David Oyelowo) is about to be sentenced on a rape charge; he knocks out a guard, steals guns, then walks into the chambers where his case was to be heard and shoots the judge and the court reporter.

He walks out of the building, boosting cars to stay one step ahead of the cops and looking for a place to lay low, even if it doesn’t seem like he has much of a plan beyond that. That place winds up being Ashley’s new apartment, where Brian keeps her bound and at gunpoint at first, pausing only to partake of Ashley’s meth stash while he paces the floor and the manhunt around him tightens its grip.  She starts talking about her family, and reading from “The Purpose Driven Life.” He listens.

Director Jerry Jameson is a veteran helmer of programs like “Murder, She Wrote” and “Magnum, P.I.,” which probably explains why “Captive” is shot like dreary TV. It’s not just the tightly-enclosed settings of Ashley’s apartment, but also the camerawork itself, which is too close and too static, filling frames with people’s heads when they speak and not showing even the slightest splash of visual storytelling, perpetually choosing to instead focus solely on capturing the next scene and the next line of dialogue. Michael Kenneth Williams, as the tough, taciturn Atlanta cop working the manhunt, gets to spit tough-guy dialogue and clumsily shove the plot forward like a man trying to move a heavy desk across a carpeted room. 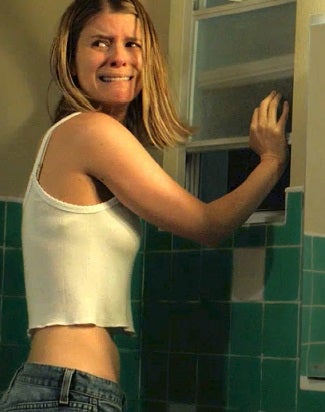 “Captive” feels less like a film in and of itself and much more like a commercial for both Warren’s and Smith’s books. There’s a much more complicated and crazy story here — a post-credits clip has, of all people, Oprah pointing out just how lucky Smith was, considering she gave an armed murderer crystal meth in her home. It’s interesting to imagine what another director could have done with this tale or how it would have benefited from a different approach — one with a taste for the absurd and an appreciation of the unusual.

Was Smith an inspired-by-necessity one-night Scheherazade, telling stories and reading out loud to survive her captivity? Was Nichols caught up in some kind of reverse Stockholm Syndrome, slowly sympathizing with his captive so much he let her step out from his captivity for her daughter’s school’s fashion show? Instead, the film’s so inflated with moral importance that it becomes ridiculous, a Lifetime movie shoved into a cage and fattened with sermons and platitudes until it is ready to be served up cold and bland.

Oyelowo is a talented actor; his work in films as diverse and good as “Jack Reacher” to “Selma” confirms that, but while he’s clearly passionate about this project (he’s listed as one of the many producers), you also realize there’s not much in the script to be passionate about. Nichols is a cipher to us — Is he sane or mad? Dangerous or just depressed? — and as such, he’s boring. Mara comes off like a cardboard caricature: You don’t get much sense of what made Smith hit bottom, nor of what it is that makes her decide to take a risky stand while at the end of her rope.

Much of the film also reduces itself to a thin, grim set of exploitative visual cliches — a white woman, bound and controlled by a scowling, muscular black man. “Captive” clearly has its heart in the right place, but it needs to worry less about showing devotion to its higher ideas and more about presenting any kind of drama to the audience; as it is, “Captive” is a boring would-be “thriller” that turns a true story into a tedious one, a movie so noble it becomes immobile.