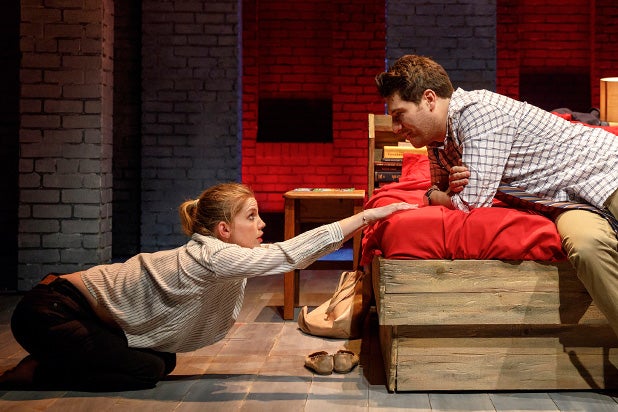 In its promising opening moments, the performances and the premise of “Cardinal” telegraph comedy — in fact, a big screwball comedy. An eager entrepreneurial woman, Lydia (Chlumsky), wants to revitalize her dying upstate New York hometown by painting the main street red. She points to the yellow city of Izamal, Mexico, and the blue city of Chefchaouen, Morocco, and wants to use them as her template for successful urban renewal.

Fortunately, she has connections to her hometown’s very youthful mayor, Jeff (Pally), who used to date her older sister and will soon become Lydia’s boyfriend. For a few minutes, Chlumsky and Pally are very Katharine Hepburn and Spencer Tracy together. She’s all nervous energy, brimming with one outrageous idea after another; he’s the solid damper, putting the brakes on her unbridled imagination.

Pally has the much easier task here. All he has to do to be amusing is give an occasional deadpan reaction to the nonsense coming from the other side of the stage. Chlumsky, on the other hand, is stuck with providing most of the energy after the script leaves her comically stranded before the end of scene one. The actress compensates by being flustered. Who wouldn’t be?

Comedy is also promised (but not delivered) in the following scene with the introduction of the wild and crazy local baker, Nat (Alex Hurt), who doesn’t want to paint the bakery’s sign red. Well, actually it’s the baker’s mother, Nancy (Becky Ann Baker), who owns the place and puts up most of the resistance to the red paint job.

Nat kneads dough in the background, and only occasionally lets out with a bizarre non sequitur in response to his mother’s objections. Forget for a moment that this argument between Lydia and Nancy makes no sense. Nancy is willing to paint the bakery red. She just wants to keep the sign beige out of respect to her dead husband who built it. Being obsessive, Lydia demands nothing but red. Being stuck with this situation, Pierce loses any sympathy (or interest) we might have for his main character.

What we later learn is that Nat’s not just background humor. He’s certifiably disturbed. Also, Jeff is on enough antidepressants to stock CVS. And Lydia owes mountains of debt, which, she keeps telling two Asian businessmen (Stephen Park, Eugene Young) who are her partners in crime, is not the impetus for her entrepreneurial zeal.

Mixed in with all this freshly unearthed trauma is a ton of Frank Capra schmaltz about the town being better off before Lydia painted it red and sent property values soaring. “Everyone’s moving away!” Nancy complains when she sells her bakery for much money, even though the place had no customers in its pre-red existence.