Legendary journalist Carl Bernstein went after Republicans Thursday, calling the GOP the “party of Trump” and saying party leadership embraces “Trumpism in all its derangement, terror and horror.” He railed that the media started raising alarms that former president Donald Trump was “deranged, dangerous [and] authoritarian” in 2017, but conservative lawmakers didn’t listen.

“Why the hell did they sit still instead of warning the American people out loud, instead of just talking to us?” he demanded.

On CNN’s “New Day,” he reacted to new reporting about Trump’s last year in office and the concerns of Joint Chiefs of Staff chair Gen. Mark Milley that Trump would stage a military coup to stay in office, saying, “We need to take this moment and say, ‘How did we get to a place where the leader of the American military compared the president of the United States to Hitlerian fascism? We didn’t say it. He did.” 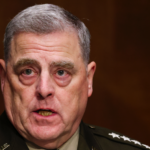 Wednesday night, numerous publications released details from the forthcoming book, “I Alone Can Fix It: Donald J. Trump’s Catastrophic Final Year.” CNN revealed that Milley called Trump’s post-election claims that the election was “rigged” against him “The Gospel of the Führer” and vowed to attempt to stop any potential coup.

The reporting in the book, Bernstein said, confirmed “what we already knew: That we had a crazy, delusional, authoritarian, dangerous, criminal president of the United States.”

“On our air — cable news, this network, MSNBC — Trump’s derangement was reported reportorially, nailed down. A good number of people — myself included, but I don’t want to take the credit for this — there are a number of people that early on said, ‘This is a deranged, dangerous, authoritarian president of the United States’ starting in 2017 and yet his party — the people around him in the White House — they did not go public, including some of the people who are quoted in these books,” he seethed.

He turned on Republican leadership, saying, “His character, his authoritarianism, his recklessness, his homicidal negligence through the pandemic — all of this was known to our leaders and the party of Trump and the party of [Senate minority leader Mitch McConnell] and what we saw in the insurrection. These are all things that were embraced up until the last minute by McConnell and Republican leadership. And they continue to be embraced — Trumpism in all its derangement, terror and horror.”

Watch above, via CNN.