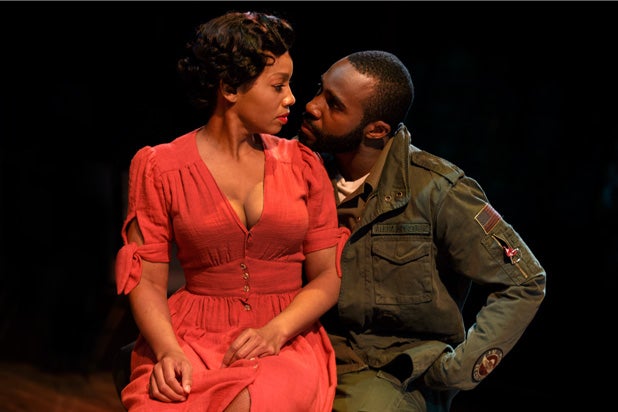 As evidenced by the new “Carmen Jones” revival, which opened Wednesday at Off Broadway’s Classic Stage Company, Oscar Hammerstein II’s reworking of the Georges Bizet classic is definitely an opera, not a musical. What’s also very clear here is that Hammerstein’s tinkering is nothing short of brilliant, and that includes his lyrics, his snippets of dialogue and, above all, his totally convincing update of the story to an all-black military base in the South during World War II.

When the factory worker Carmen Jones seduces her boyfriend Joe into going AWOL and following her to Chicago, we still think of old Seville when her new lust interest, boxer Husky Miller, sings “Stan’ Up and Fight.” The words are Hammerstein’s but nothing says “bullfighter” like Bizet’s tune “March of the Toreadors.”

The original 1943 “Carmen Jones” was a good hour shorter than “Carmen,” and under the direction of John Doyle, this revival clocks in at just over 90 minutes. There’s a strong tradition for hacking away at Bizet’s bloated opera. In 1983, Peter Brook enjoyed a great success with his very truncated “La Tragedie de Carmen,” which employed only four performers to tell the story of doomed love.

Bizet purists will squawk, but “Carmen” has always been my least favorite work among the Met Opera’s standard repertory, those dozen or so warhorses that get staged almost every other season. The absence of Bizet’s children’s chorus from Act 1 put me in a good mood for the rest of the evening. With that disclosure out of the way, Doyle’s work here makes clear that “Carmen Jones” deserves a revival on Broadway. And the superb cast he has assembled is more than ready for midtown Manhattan.

It’s a little odd to hear Carmen’s arias sung by a soprano, but Anika Noni Rose seduces with an ultra-cool presence, if not the requisite low notes. She sits back and lets the men on stage, as well as the audience, come to her. In a very intimate Off Broadway theater, it’s not easy to sing opera without showing the physical effort involved. We’re essentially watching her in close-up throughout the show. Rose gives a masterful minimalist performance, one that’s delivered with utter confidence, which is the hallmark of every great Carmen.

Elsewhere the vocals are more in line with what operagoers would expect, and Doyle’s singing actors are generous with their trained voices. David Aron Damane’s booming bass-baritone is ideal for Husky Miller, or the Toreador.

Lindsay Roberts offers an unusually intense Cindy Lou, the good girl who follows Joe just as he tragically follows Carmen. The mercurial intricacies of “La fleur que tu m’avais jetee” (“Dis Flower” here) hold no problems for Clifton Duncan. His Joe is perhaps a little too skittish and virginal when he first meets Carmen, but this soldier grows up fast for his date with death.

As for all those “dises,” “dats” and “does” in the lyrics, the actors have wisely softened or omitted them. Bill T. Jones is the esteemed choreographer. There’s not much dancing, but the ensemble moves with ease around the small stage.