“Carol” fits the mold of director Todd Haynes‘ extraordinary work, in that it calls to mind other great films (“Brief Encounter,” “Brokeback Mountain,” even Haynes’ own “Far From Heaven”) while standing alone as its own unique creation.

In the tradition of cineaste auteurs as far-ranging as Scorsese, Tarantino and Almodóvar, Haynes draws on a deep well of film knowledge.

But he filters it through his own sensibility, whether he’s exploring his pop culture obsessions (Bob Dylan in “I’m Not There,” Karen Carpenter in “Superstar”) or bringing a queer perspective to eras when such stories were never told on the big screen.

It’s that latter strategy that makes “Carol” such a fascinating artifact: It’s got classic Hollywood style and pace but it’s also a film that’s destined to become a staple of queer studies courses, not only for the lesbian romance at its core but also for the way Haynes takes a subtext and makes it text. He builds a film on the furtive glances and secretive language that gays and lesbians in this country had to rely upon for so long to find each other and to express themselves.

When mink-swathed Carol (Cate Blanchett) and shopgirl Therese (Rooney Mara) first meet at the toy counter at the department store where Therese works, it’s an outwardly mundane exchange between retailer and client.

But the sparks between them are palpable, and the language — “What did you want when you were a little girl?” — fairly explodes with what’s going unspoken.

Also Read: 'Carol' Star Cate Blanchett On Reaction to Paris Attacks: 'Also on my Mind Are The People in Beirut'

While Carol’s affection for other women — including her ex, Abby (Sarah Paulson) — led to the dissolution of her marriage to vulnerable-but-brutish Harge (Kyle Chandler), Therese has never before entertained such a notion. Despite her engagement to Richard (Jake Lacy, confirming his status as the current cinema’s favorite empathetic conservative), Therese finds herself drawn more and more to Carol as their friendship blossoms. 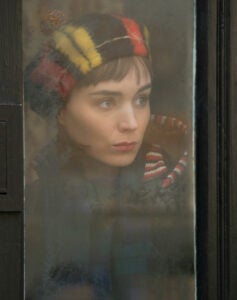 When Harge whisks away their daughter, Rindy (played by twins Sadie and K.K. Heim) for Christmas, then announces his intention to seek full custody because of Carol’s “immoral” behavior, she decides to leave town, and invites Therese to join her on a road trip. Over Richard’s objections, Therese throws caution to the wind and accompanies her new friend, even though she and Carol have yet to consummate the relationship. (It’s a testimony to their brewing passion that it doesn’t matter that the women don’t even kiss until they’ve gotten as far west as Iowa; make what you will of the fact that they finally sleep together in a town called Waterloo.)

Screenwriter Phyllis Nagy (“Mrs. Harris”) has adapted Patricia Highsmith‘s novel “The Price of Salt,” one that Highsmith originally had to publish under a pen name not only for its lesbian content but also for the fact that it’s one of the few books of the 1950s about a same-sex relationship that has an ending that doesn’t involve suicide or a “cure.”

The screenplay maintains the book’s evocation of the era’s stultifying repression and conformity — Carol laments having to endure another “tomato-aspic luncheon” — while telling a love story that’s neither gloomily doomed nor anachronistically revolutionary.

“Carol” is a work of near-perfection, from the exquisite performances (Blanchett has never been better, and that’s saying something) to Ed Lachman’s evocative cinematography (his take on the 1950s is the wintry, melancholy version of the look of “Brooklyn”) to Carter Burwell’s powerfully minimalist score.

Like the characters, the audience must interpret the unspoken suggestions and subtle motions that have long been the semaphore of sexual rebels, but Nagy, Haynes and the talented cast tell a full story even when the characters have to talk around what they’re really feeling. Both haunting and sweeping, “Carol” represents another masterwork from one of this generation’s great filmmakers.