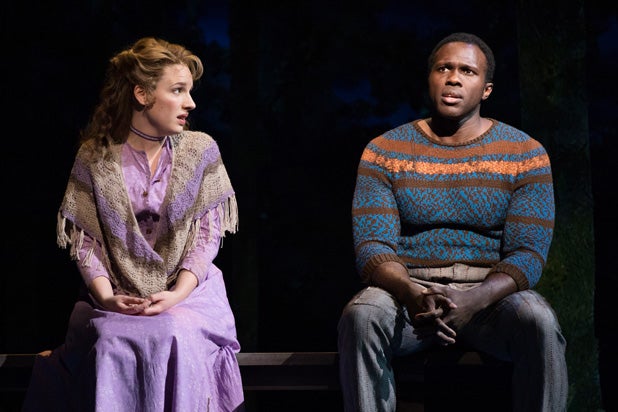 The new version of “Carousel” is possibly the best sung, best danced revival to hit Broadway in recent memory, and that’s a memory that goes back to the last few decades of the previous century. I throw the word “possibly” in there only to cover myself.

It took real guts for the lead producers and director Jack O’Brien to revive Rodgers and Hammerstein’s “Carousel,” which opened Thursday at the Imperial Theatre. Theatergoers still speak with hushed reverence about Nicholas Hytner’s phenomenal “Carousel” revival, imported from the National Theatre to Lincoln Center Theatre in 1994. The good news is that we don’t have to choose which version is more perfect. Enjoy the memory of Hytner’s show and make sure you don’t miss O’Brien’s.

Like any director, O’Brien has had his hits and misses with original musicals. But when it comes to revivals of classic material, he is a traditionalist who always gets to the heart of the material, and in the process uncovers motivations and dynamics not seen before. He did it with the Houston Grand Opera’s “Porgy and Bess,” as well as the Met Opera’s “Il Trittico” (to be revived this November), and now with “Carousel.”

Take the extended scene early in the musical where the headstrong but very innocent factory worker Julie Jordan meets the equally headstrong but very flawed carnival barker Billy Bigelow and they sing “If I Loved You.” The erotically charged performances of Jessie Mueller and Joshua Henry turn this conditional love duet into a veritable prequel to “A Streetcar Named Desire,” a window into Stella and Stanley’s initial lust-filled encounter.

Julie is more self-aware than Stella; Billy is infinitely more tortured than Stanley, but just as the Tennessee Williams couple enjoys a physical love that leads to physical abuse, so we understand where Julie and Billy are headed. Suddenly, the show’s big “problem” — the hero is a wife-beater! — evaporates in the warm New England summer air. In O’Brien’s hands, Mueller and Henry make us see why Billy behaves as he does, and why he can never forgive himself. It’s no longer a question of our having to find ways to forgive him.

O’Brien works even greater magic with the musical’s secondary couple. Enoch Snow and Carrie Pipperidge are the stable, reliable, hard-working pair, the polar opposite of the fraught Julie and Billy. Enoch never beats Carrie, and he provides monetarily for her big time.

But as played by Alexander Gemignani (in magnificent voice), Enoch is the kind of husband who strangles a woman’s spirit without ever laying a hand on her. He dictates their future, and that includes not only finances but how many kids she’ll give him, which is too many in Carrie’s opinion. Lindsey Mendez delights by revealing a Carrie who is clever enough to see through Enoch’s manipulations and capable of maneuvering around his restrictions. In the end, this “Carousel” is less about abusive husbands than the women who know how to survive them.

But back to the singing and dancing. In his Broadway debut, the New York City Ballet’s resident choreographer Justin Peck fires up the stage in ways that the show’s original choreographer, Agnes de Mille, never imagined. (In the Hytner production, Kenneth MacMillan’s dance offered no real improvement on de Mille’s work.) We haven’t seen this kind of male-animal intensity on the Broadway stage since the heyday of Michael Kidd. Peck has handpicked a chorus of ballet professionals, and when the gravity-defying Amar Ramasar (also from NYCB) leads the men to perform “Blow High, Blow Low,” the Imperial Theatre erupts in a way I haven’t heard since Michael Bennett gave us the hustle in “Ballroom.”

Peck also knows how to tell a story. The second act ballet with Brittany Pollack and Andrei Chagas crystallizes in dance the show’s theme of metamorphosis and how Louise, Julie and Billy’s daughter, is fated to repeat her parents’ mistakes.

Sound designer Scott Lehrer has dialed the amplification way back from the piped-in levels of a “Hello, Dolly!” and most other Broadway musicals these days. You can actually hear the real singing voices, and what great voices they are. Standouts are Mueller, Gemignani, Mendez and, of course, Renee Fleming, who, as Julie’s cousin Nettie, gives splendid renditions of the classics “June Is Bustin’ Out All Over” and “You’ll Never Walk Alone.” Amazingly, the famed soprano is more precise and less mannered in her singing on Broadway than she often was at the Metropolitan Opera.

Speaking of the opera, listening to Henry is not unlike hearing the very veteran Placido Domingo in the current staging of Verdi’s “Luisa Miller” at the Met. They both save themselves for the big moments, but cheat a little in the build-up to those long climactic passages.

In Henry’s case, he makes it work by turning the slightly truncated phrases into an affectation reflecting his character’s extreme machismo. It’s as if his Billy is asking himself why he’s singing, but in the end wants to prove to us he really can. And Henry definitely can. Billy Bigelow is the Tristan of Broadway musical roles. It’s a killer to sing, much less do it eight performances a week.

Who can forget Bob Crowley’s scenic design for the Hytner production when the blue stage floor at the Vivian Beaumont Theatre revolved and the boats filled with townspeople took off in the fog for the clambake?