James Corden is finally back in the driver’s seat for the first “Carpool Karaoke” in two years, and for the segment’s big return on Wednesday night’s “Late, Late Show,” he’s joined by Nicki Minaj.

Speaking with press on Wednesday afternoon, Corden said he was “blown away” by working with the Grammy nominated rapper.

“The entire afternoon that we spent together, I was so happy to be in her orbit and her company and I really, really loved being with her,” he said. “It was so joyous.” 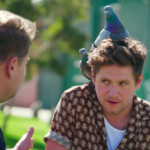 “Carpool Karaoke” was paused in 2020 due to the pandemic, but Corden told reporters that recently, it finally felt right to bring it back.

“It’s felt over the past year very, very slowly, in one sense or another, like we started to get our show back. But this was this is obviously a big part of our show — this segment. The entire pandemic … there [were] so many things that we couldn’t do, and I think that’s true of every show,” he explained. “But for us, our show is very much about getting out there, whether that’s running out into the street and doing musicals in a crosswalk or big taped bits or having all the guests together on a couch at the same time.”

The carpools are, of course, one of the most iconic bits from the show, which is why Corden said he and the producers decided to wait.

“The conclusion we came to was not to do this segment unless we could do it right,” he said. “So that’s why it took a long time. There’s probably a version of it we could have done a while ago, but … it didn’t feel completely right.”

As soon as CBS gave the go-ahead to resume “Carpool Karaoke,” everyone jumped at the chance to have Minaj in the passenger seat, the host said.

“Carpool Karaoke” will air tonight during “The Late Late Show” on CBS. 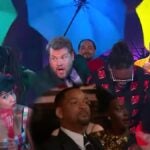