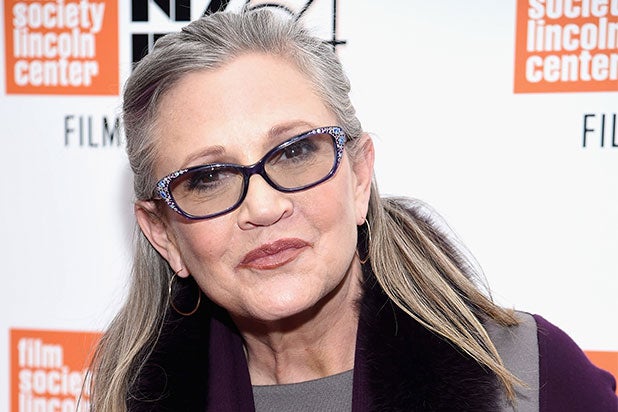 Hollywood took to Twitter to send will wishes to “Star Wars” actress Carrie Fisher, who reportedly suffered a heart attack on a plane flying from London to Los Angeles on Friday.

“The whole world is sending you so much love! Sending you the universes most powerful Force XXXXX,” Captain Phasma actress Gwendoline Christie tweeted.

According to TMZ, the “Star Wars” actress went into cardiac arrest and passengers on board administered CPR. When the plane landed, paramedics rushed the 60-year-old to a nearby hospital. The Los Angeles Times reported that Fisher was in critical condition.

Los Angeles Fire Department spokesman Erik Scott told TheWrap that “at 12:11 p.m., the LAFD responded to LAX International Airport gate 74 for a patient on an inbound flight on cardiac arrest. Paramedics were standing by for the plane’s arrival and provided advanced life support and aggressively treated and transported patient to a nearby hospital.

@carrieffisher The whole world is sending you so much love! Sending you the universes most powerful Force XXXXX❤❤❤

send love prayers and the kitchen sink to my sister @carrieffisher Fuck no . Fuck no.

I ask everyone to stop for a moment and send special thoughts to @carrieffisher.

Thoughts and prayers for our friend and everyone's favorite princess right now.. @carrieffisher

So much love being sent to you @carrieffisher

My thoughts and prayers R with @carrieffisher RIGHT NOW! I pray God brings her back safely! She's a sweet woman, back doin what she loves!????????

The world waits. Sending love and light to @carrieffisher and her family.

If anyone can say 'Fuck off' to 2016, it's Carrie Fisher. The force is with you, ya badass princess. Stay strong. @carrieffisher

Best wishes and get well soon to one of my favorite writers @carrieffisher pic.twitter.com/2rYrMOaTDN

1. "Who are you?" This is our first glimpse is of Rey (Daisy Ridley) dressed in heavy-duty sand planet gear, fitted with repurposed lenses from a Stormtrooper helmet. The Force is strong with this one!