Carrie Fisher, the writer and actress immortalized as Princess Leia in “Star Wars,” died after suffering a heart attack on a transatlantic flight last week. She was 60.

“It is with a very deep sadness that Billie Lourd confirms that her beloved mother Carrie Fisher passed away at 8:55 this morning,” reads the statement. “She was loved by the world and she will be missed profoundly. Our entire family thanks you for your thoughts and prayers”

Also Read: Carrie Fisher Mourned by Hollywood: 'May the Force Be With You Always'

Fisher had been hospitalized since Friday, when she had a heart attack while traveling from London to Los Angeles. After she was taken to UCLA Medical Center for emergency treatment, she was reported to be in stable condition over the weekend.

Along with George Lucas’ blockbuster trilogy, Fisher’s other notable film roles included “Shampoo,” “The Blues Brothers,” “Hannah and Her Sisters,” “The ‘Burbs,” “Austin Powers: International Man of Mystery” and “When Harry Met Sally …”

The actress’ semi-autobiographical 1987 novel, “Postcards From the Edge,” fictionalized her drug addiction and the troubled relationship with her mother, “Singin’ in the Rain” actress Debbie Reynolds. The book became a hit film in 1990 starring Meryl Streep, Shirley MacLaine and Dennis Quaid.

Last year, Fisher revived the role that made her a global icon four decades earlier in “Star Wars: The Force Awakens.” 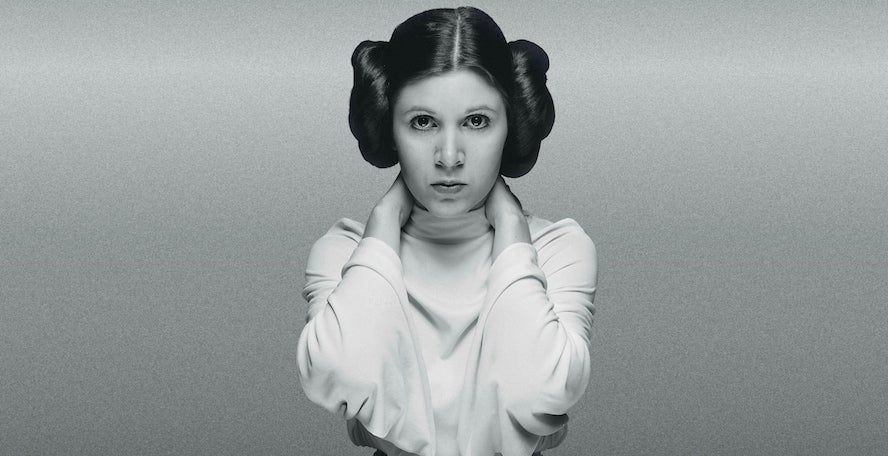 She had recently embarked on a high-profile book tour for her memoir, “The Princess Diarist,” in which she said she had a steamy affair with her onscreen “Star Wars” costar Harrison Ford.

Born in Beverly Hills, California, Carrie was the daughter of Reynolds and singer Eddie Fisher. However, her parents divorced when she was just two after her father had an affair with Reynolds’ close friend, Elizabeth Taylor.

Fisher’s first major role was in a revival in the hit Broadway revival “Irene” (1973) alongside her mother.

She went on to enroll in London’s Central School of Speech and Drama, but left before graduation as the schedule conflicted with “Star Wars.”

Fisher made her big screen debut in “Shampoo” (1970) with Warren Beatty, Goldie Hawn and Julie Christie. In 1977, she won the role that would make her internationally famous in “Star Wars,” as the revolutionary princess of the planet Alderaan.

Following starring roles in “Empire Strikes Back” and “Return of the Jedi,” Fisher had a string of small or guest parts such as “Scream 3,” “Jay and Silent Bob Strike Back,” “These Old Broads,” “Sex and the City” and “Entourage.”

She was also known as one of Hollywood’s top script doctors, polishing the work of other writers — including the scripts of Lucas’ TV series, “The Young Indiana Jones Chronicles.”

In 2006, Fisher wrote and performed in her one-woman play “Wishful Drinking,” based on her book which the New York Times described as “funny, sardonic little memoir.”

The actress had been vocal about her personal struggles for many years, and talked openly about her diagnosis of bipolar disorder and addictions to cocaine and prescription medication.

“I don’t think I was ever suicidal, and that’s probably because of drugs. I did have … do have this mood disorder, so it probably saves me from the most intense feelings from that,” she recently told Rolling Stone magazine.

When asked about her drug regrets, she said she wished she had never taken “the stronger of the opiate class. I would say heroin. I snorted that. I never did it the full-on way, which is basically what you do when you’re trying to kill yourself.”

Fisher is survived by Lourd, her daughter, and Reynolds, her mother.

From ”When Harry Met Sally“ to ”Scream 3,“ the Princess Leia actress transcended all genres

Carrie Fisher rose to fame as Princess Leia in 1977's "Star Wars," but she made a number of noteworthy appearances in a galaxy not so far, far away. On the fourth anniversary of her death -- we still miss you, Carrie! -- we look back on some of her most interesting roles outside of the galaxy far, far away.