Carrie Underwood only won one Academy of Country Music award at the MGM Grand in Las Vegas on Sunday night, but that one was an historic victory that no other female country star had ever achieved.

Before she won the Entertainer of the Year honor, the 2005 “American Idol” winner had lost in the Top Female Vocalist and Album of the Year categories to Miranda Lambert, in the Vocal Event of the Year race to Blake Shelton with Trace Adkins, and in the Song of the Year competition to Lady Antebellum. 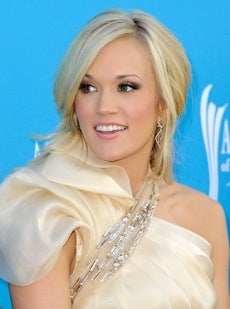 (Underwood was also given a non-competitive award, the Triple Crown Award, to honor her previous victories in the Entertainer of the Year, Top Female Vocalist of the Year and Top New Artist categories.)

Lady Antebellum was the night’s big winner if you go by the number of awards: the hit trio, which led in nominations with seven, won five trophies, including Top Vocal Group of the Year (breaking Rascal Flatts’ seven-year stranglehold on the category) as well as Song of the Year and Single of the Year for “Need You More.”

Miranda Lambert took home three awards, including Top Female Vocalist, Album of the Year and Video of the Year. She was presented with that award at a separate reception on Saturday night.

Of course, country music awards voters have always been creatures of habit. Brad Paisley was named Top Male Vocalist of the Year for the fourth consecutive time, while Brooks & Dunn were named Best Vocal Duo for the 10th time.

The show, which was hosted by Reba McEntire, was predictably dominated by performances, beginning with a extravaganza that featured Underwood, Lambert, Paisley, Charlie Daniels and John Fogerty.

In the 45-year history of the ACM Awards, only five women and one female group have been named Entertainer of the Year, and each won a single time: Loretta Lynn, Dolly Parton, Barbara Mandrell, Reba McEntire, Shania Twain and the Dixie Chicks.