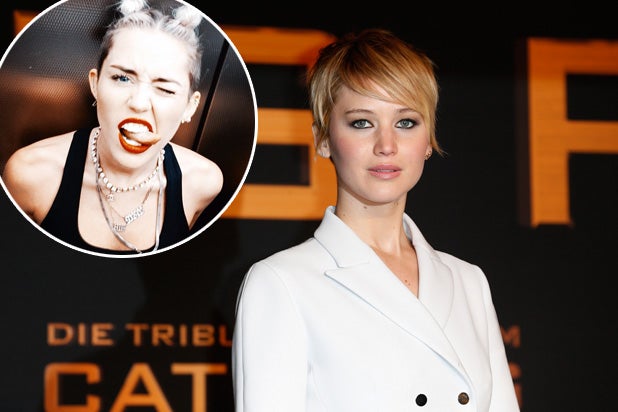 They want it so much that they’ll take recent comments she made about sexuality in Hollywood in which she calls the obsession with young sexuality “disgusting” to somehow reflect her thoughts on 20-year-old Cyrus.

“It is a part of the entertainment industry that sells. Sex sells, and for some disgusting reason young sex sells even more,” she told BBC’s Newsnight. Burn! She didn’t name Miley directly, but her answer sure was specific enough.

Jennifer slammed Miley even further by explaining why the “Wrecking Ball” singer expresses herself the way she does.

If you actually watch the interview, the only thing she says directly about Cyrus’ antics is “To each his own.” That’s not to say that BBC Newsnight didn’t try really hard to get Lawrence to comment on Miley, but the actress never really went there.

Hollywood Life isn’t alone. UsWeekly, Zap2it, and The Huffington Post, among others, also took the comments out of context. So, cool your heels, internet, there’s no “Hunger Games”-twerking combination to be seen here.

Moving on, BBC Newsnight did get this interesting statement from Lawrence on whether she regretted doing a sexy shoot for GQ when she was 20-years-old.

“It was a PR move basically, that I was completely comfortable with,” Lawrence, 23, said. “I don’t have any regrets about that.”