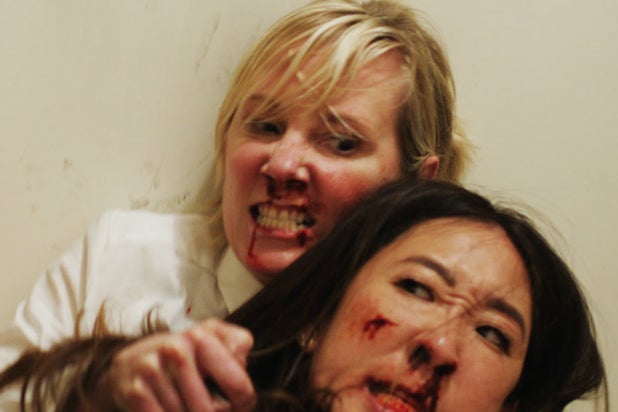 Veronica (Sandra Oh) is rich and entitled. She’s married to a defense contractor (Damian Young), lives in a huge Manhattan apartment, has a teenage son she’s actively discouraging from attending art school (“You can be whatever you want. Just not… this.”), and loves to drink to a degree that embarrasses her family. In current Buzzfeed-listed parlance, she is a textbook “Wine Mom,” one with a full grasp of her own assumed superiority.

Ashley (Anne Heche) is poor and bitter. She’s a career-struggling artist whose overtly political art has few admirers, and she lives in Bushwick with her caterer girlfriend Lisa (Alicia Silverstone). Ashley and Veronica went to college together and have always hated each other.

When Lisa drafts Ashley into service as an hors d’oeuvres server at a fancy party, one at which Veronica is absorbed in her favorite full-pour pastime, the Not Friends reunite, exchange decades-simmering insults, and wind up in a stairwell engaged in the sort of vicious fight usually reserved for “The Raid” franchise. The exchange puts Veronica in a coma for two years, and she wakes to find her world turned upside-down. There might be some revenge on the way.

See Video: 'The Last Word' Filmmakers and Cast on Working with Shirley MacLaine

That brutal stairwell beatdown summons the memory of Robert Longo’s epic 1982 artwork “Untitled (White Riot),” in which black-and-white-clad New Yorkers push, grab, and headlock each other for no apparent reason. Ashley, especially, in her catering uniform, could have stepped right out of Longo’s urban comedy of violent manners. But while Longo’s now-famous work is a somewhat ambiguous expression of Reagan-era anxiety and atmospheric cultural violence, “Catfight” abandons all nuance in favor of a satirical sledgehammer.

Its very title is ironic, at once invoking the simultaneous camp and sexual come-on of a soaking wet “Dynasty” grudge match between Linda Evans and Joan Collins, while delivering all the spurting blood, loud Foley crunch, and near-death consequence of any number of Hollywood dude-brawls. The battle scenes in “Catfight” are sprawling, lengthy, fearful, and messy, the most important set pieces of the narrative, but they’re delivered in italics. They interrupt the heterosexual male gaze while also managing to reinforce a smug Neoliberal status quo that trivializes the characters’ grievances — the film barely bothers to tell you why these two dislike each other so much — by suggesting neither has any real cause to come to blows.

At various moments in the story, both women cash in on an unseen, years-long war the U.S. is fighting in a region vaguely described as “the Middle East.” The film’s argument is that both responses — passively collecting money from a spouse’s successful defense contracting business and making money from strident protest art — are equally unethical, which means that in this story’s economy, “The Daily Show” and Halliburton are both guilty of war profiteering.

Compounding the weird false equivalencies are exhausted shots at a hammy, sub-“Idiocracy”-style TV show called “The Fart Machine,” and the needless bashing of anxious, urban, helicopter parenting. When the tepid Sarah Jessica Parker vehicle “I Don’t Know How She Does It” beats you to the satirical punch, it’s probably best to go in a different direction. “Catfight” does not. After an hour with these easy targets, the fact that there are no jokes about gluten comes as a surprise.

Writer-director Onur Tukel’s (“Applesauce”) didactic script works best when Oh and Heche are together in a room, and his direction allows them to enjoy their poisonous dance. They verbally spar before physically tearing each other apart, and the fight choreography is designed to make you feel every punch.

The failure of “Catfight” lies not with the leads, then, but with wasted opportunity. Throughout the film Tukel nods to ideas about the comfortable privilege of ignorance; the tacit acceptance of power as justice; the way money turns people into the worst versions of themselves; the seeming intractable problems of misogyny, homophobia, and the corporatization of global conflict. And then he walks right on by, as though mentioning the issues were the same as addressing them.

He’s eager to deliver the spectacle of more cool blood spray, and content to suggest that since there’s no real answer, we might all as well just sit back and enjoy it.