CBS is moving “NCIS: Los Angeles” to Sunday nights at 10 p.m. this fall, teaming it up with “The Equalizer” and new drama “East New York.” 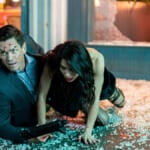 “CBS had another incredible season. In addition to repeating as America’s most-watched network, we launched several breakout hits, not to mention winning and improving many time periods across our schedule,” Kelly Kahl, president of CBS Entertainment, said in a statement. “For the new season, we once again looked for ways to strengthen our position with new, compelling series, scheduling them strategically to guarantee sampling and maximize consistency and flow. We believe these great new shows, returning hits and our robust slate of event programming positions us for another winning year.”

“True Lies,” which is inspired by the 1994 James Cameron movie that starred Arnold Schwarzenegger, will debut in midseason.