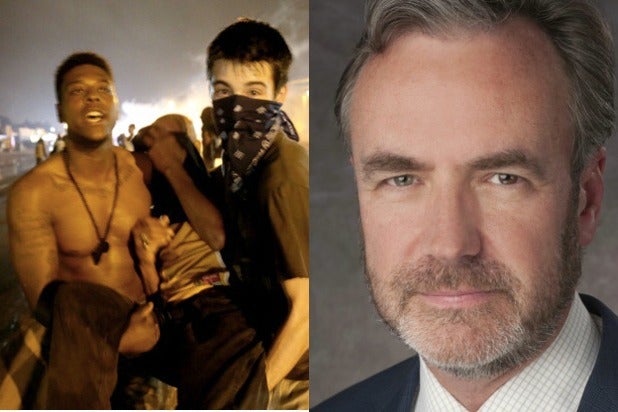 Ferguson might not be the center of the news cycle anymore, but that doesn’t mean CBS is taking its eye off the story.

As the fires, toppled police cars, looting, and riots are no longer filling up broadcast and cable news networks, “CBS Evening News with Scott Pelley” executive producer Steve Capus is seizing on an opportunity to focus in-depth on a story other outlets have moved on from.

“The news media tends to act like the kids on a young soccer team,” Capus told TheWrap on Wednesday. “We all follow the ball as it moves from one side of the field to the next — like a kids soccer game. And the kid who ends up scoring a goal was the one who’s off to the corner by himself just waiting for the opportunity.”

Also read: A Ferguson Photo That Might Actually Give You Hope

“The day two — the follow-up story — is often the place that you have the territory to yourself, and I think it’s where you can make some really interesting, journalistic decisions on where you’re focus is going to be — on day two, day three, day four,” he explained.

On Wednesday night, Capus’ show launches a multi-part series examining race relations in America. Pelley will sit down with a panel of mayors including Carlos Gimenez of Miami; Ed Murray of Seattle; Lester Taylor of East Orange, N.J.; and Karen Freeman-Wilson of Gary, Indiana. Later in the week, the show will speak with younger millennials about the issues.

While his competitors will probably lead with the weather, Capus decided to lead tonight’s program with what he sees as the most important story; damned what his competitors think.

A police officer runs by a burning police car in Ferguson on Nov. 24 (Getty Images)

“I think it’s [race relations] a story of our time and it’s our own original reporting and analysis, and why not?”

Capus’ evening news program isn’t only diving in deep on race relations; the show dedicated the first 11 minutes of Tuesday evening’s broadcast to the CIA torture report; more than any other network news broadcast.

“We decided to take a different approach; that’s the kind of thing ’60 Minutes’ would do but the evening news tends to not do, so I guess the question is, why not? We have a guy who’s a ’60 Minutes’ correspondent who happens to anchor the evening news …we thought it was justified, and I was delighted with the way it turned out.

“Frankly it’s the same idea that led us to put the spotlight on the issue of race,” he continued. “I think we journalists do a disservice when all we focus on are these kinds of issues on the night when a building is looted, or burned, or people are protesting in the streets.

“Lets take a look at these issues on a quote on quote quiet, normal night,” Capus concluded.