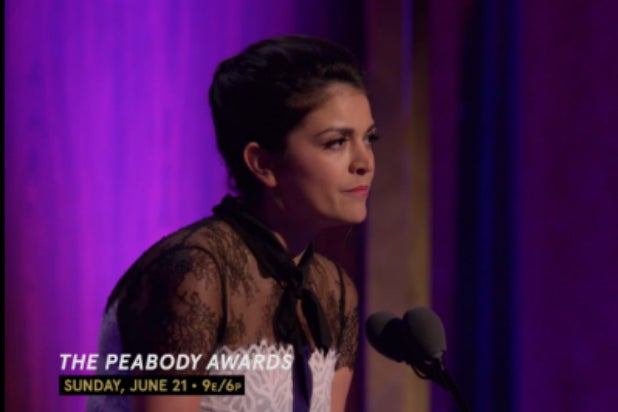 “Saturday Night Live’s” Cecily Strong dropped her crowd-pleasing Sarah Koenig impression at the Peabody Awards last month, but the general public is just getting to see it now.

The “SNL” standout, like many, became obsessed with the “Serial” podcast last year. Unlike everyone else in the world, Strong planted her flag in the character with a brilliant sketch on the NBC staple’s Christmas episode. That original skit is posted at the bottom of this story as well.

More recently, Strong brought the Koenig act back at the May 31 gala.

“‘Serial’ was so influential, that the Court of Special Appeals agreed to hear the testimony from Asia McClain,” Strong set up.

Then she got right into character, inching closer to the microphone.

“You remember her, she was in the library after school let out,” Strong began, with perfect Koenig tone and cadence. “She’s running late, to get a ride from her boyfriend, Derek. She saw Adnan, they talked about Hae. He seemed calm.”

“You guys, I don’t do impressions,” Strong finished, as herself, “but that’s how obsessed I am.”

“Serial” became the first podcast ever to win a Peabody Award.

Now watch Strong’s original go of the impersonation on “SNL”: