After a heartwarming tribute to the television industry and the late rapper Biz Markie, Cedric the Entertainer brought the funny to the beginning of the 73rd annual Primetime Emmy Awards with a few jokes about the COVID-19 pandemic, diversity in the Television Academy’s 2021 nominees and the royal family.

“The Neighborhood” star Cedric the Entertainer is hosting the show for his home network, CBS, from L.A. Live’s Event Deck.

See some of his best opening quips below.

“So many talented people in this room. Matter of fact, lock the doors. We’re not leaving until we find a new host for ‘Jeopardy!'” 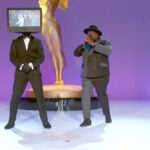 “We all vaxxed. We had to get vaxxed to come here. I got vaxxed. I did not have a reaction like Nicki Minaj’s cousin’s friend, OK.”

“I got Pfizer, because I’m boujee. Pfizer, that’s the Neiman Marcus of vaccines. Moderna, that’s Macy’s. And then Johnson & Johnson, that’s TJ Maxx, of course.”

“Billy Porter, I saw him on the red carpet one year, he was dressed like a White House chandelier.”

“It comes with a lot of pressure being black hosting a job like this. My people expect I can just give an award to anybody. Black people, like, ‘Yo, Ced, you gotta give Martin Lawrence an Emmy, man. And not just Martin Lawrence, you gotta give Sha Na Na one, too.’ I’m like, ‘That’s the same person, dawg.’ Jimmy Kimmel don’t have that problem, he don’t have to give an award to Tony Danza.”

“WandaVision, doesn’t it sound like if Wanda Sykes was a feisty optometrist?”

“The Bridgertons, very spicy. But I was thinking, ain’t no way in hell a Black man is going to have that much sex with a white woman in the 1800s. Jamie Foxx couldn’t have done that as Django, and he was unchained.”

“As great as ‘The Crown’ is, it pales in comparison to the real monarchy. That Oprah interview with Prince Harry and Meghan, whoo! That was the real tea there, wasn’t it. Meghan must have put it on that boy, because he renounced his throne quicker than Eddie Murphy in ‘Coming to America.'”