Cedric the Entertainer will host the 73rd Emmys, which will take place in front of a limited audience at Los Angeles’ Microsoft Theatre.

CBS will air the awards show on Sept. 19. It will also be available on Paramount+.

It will be the first time Cedric the Entertainer, who stars in CBS’ sitcom “The Neighborhood,” will host the Emmys. Reginald Hudlin and Ian Stewart, who executive produced last year’s virtual Emmys, will return. 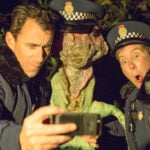 “Since I was a little boy huddled up next to my grandmother, television has always been my reliable friend, so it is an enormous honor for me to host this year’s Emmy Awards,” Cedric the Entertainer said. “Throughout the roller-coaster of a year that we have all lived through, television has helped us stay connected as a society like never before. It not only entertained us, but as it always has, it helped to open our eyes, educate us, and hopefully brought about a better understanding of who we are as a people. I can’t wait to take the stage to celebrate all of the great shows and performances that made us laugh, cry, dance and sing over the past year.”

Last year’s Emmys, which were hosted by Jimmy Kimmel, were a mostly virtual affair, with winners streaming in from their homes. In what would be a trend for these Zoom-inspired ceremonies, the 72nd Emmys on ABC hit a record-low 6.1 million viewers, a dip of 29% compared to the year before. Among adults 18-49, the decline was 13%.